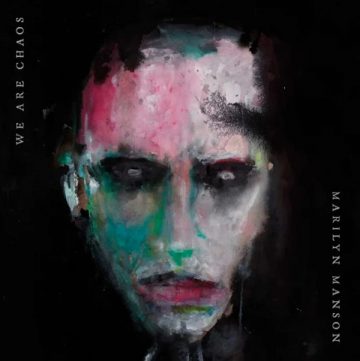 Coming off a pair of acclaimed records, Marilyn Manson is in the midst of a mid-career renascence as he returns with We Are Chaos. The album, written and produced by Shooter Jennings, sees Manson continue forward on a path of musical sophistication with a modern and reflective tone to it.

Opening with the political anti-anthem, “Red Black And Blue”, Manson kicks off his first album in two years with a hard-rocking banger that feels like it can race off the tracks at almost any given second. The track is as unbridled as the following “We Are Chaos” is contemplative and straight-ahead. The title track and lead single takes the form of a softer power ballad that can be already heard echoing back at Manson from sold-out venues on the road. The polarity between the pair sets the tone of We Are Chaos, the push and pull between heavy rock fueled by dance beats – in traditional Manson fashion – and modern, synth driven art rock. The best of both worlds is heard on “Don’t Chase The Dead”, a song which includes traits from both styles mentioned and feels greatly inspired by the recent work from Queens Of The Stone Age.

Throughout the course of its ten tracks, We Are Chaos emphasises a sense of enriched musicality and taste over shock and, for the most part, hard rock and metal. Songs like “Paint You With My Love”, “Half-Way One Step Forward”, “Solve Coagula”, and the closing “Broken Needle” are stirring ballads with Manson baring a sense of raw emotional vulnerability. It is refreshing to hear from Manson, while most of his records have included the odd track performed in this manner, hearing this side take the lead is both interesting and captivating. That being said, three of the strongest tracks on We Are Chaos are “Infinite Darkness”, “Perfume”, and “Keep My Head Together”, all three of which are driven by haunting guitars and grimy beats. While the former two sound like the material from Manson’s last pair of records, “Keep My Head Together” is a monster all unto itself that is a unique reflection of the up-tempo alternative rock Manson is most interested in.

Trading in riffs and crunching guitars for a pallet of lush and echoing synths of today, Manson continues to strike gold on We Are Chaos. While many, myself included, may have preferred the cinematic edge colliding with vintage Manson rock from the previous two records, his latest album resided a step further down a similar creative path, only veering off into a slightly different direction. The result is a brooding, moody, and reflective collection of music that feels contemporary for the strange times we live in. Yes, perhaps it is only through the continued brilliance and relevance of both his music and thoughts that Manson can continue to shock America.

A passion for music has always been a part of Gerrod’s life. As a young boy, he was raised on a steady diet of the music from The Chili Peppers, Aerosmith, The Stones, Prince, and others from his mum. Raised in the GTA, Gerrod continued to foster his love for music by attending a wide range of concerts and learning the drums. His unapologetic passion for music has no bounds and has spread to a wide variety of styles, whether it be the 90’s rock that sound tracked his teenage years, the jazz he studied in university, or his newfound love for hip-hop. He recently received his bachelors in music and education from York University and is passionate about writing and reviewing good (and less than good) music. Gerrod is also the drummer and songwriter for a Toronto based rock & roll band, One In The Chamber.
RELATED ARTICLES
album reviewalbum reviewsloma vista recordings
8.0