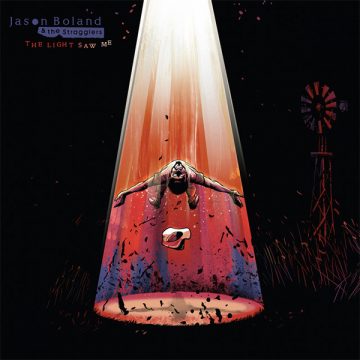 Jason Boland & The Stragglers
The Light Saw Me
Thirty Tigers

I’m sure most of you who are reading this have heard all sorts of country music variations, conventional country, left-field country, country rock, Americana, roots, what not. Well, now we can all add one more to the list – sci-fi country.

No, it is not a joke, nor are Jason Boland & The Stragglers nor their The Light Saw Me album. They are exactly what their press releases say – sci-fi country (rock) — and really good at that.

Actually, music-wise, it was hard to fail, as Boland has now ten albums under his belt, and this latest release, along with his excellent Stragglers, was produced by such a luminary that is Shooter Jennings.

The part where there’s serious danger for Boland here is lyrics, which he escapes by not just turning another ‘UFO snatched me’ type of storyline, but by covering the vast ground between old legends, ‘standard’ sci-fi, and all the conspiracy theories that abound today, which is basically anything counter to reality in real time, if you will.

Essentially, Boland picked up on a real recipe for disaster and turned it into a tasty (country) musical meal. The Light Saw Me is worth both your time and effort.

Formerly a lot of things, including a journalist and a translator, currently a freelance writer living in The Netherlands.
RELATED ARTICLES
album reviewalbum reviewsthirty tigers
9.0