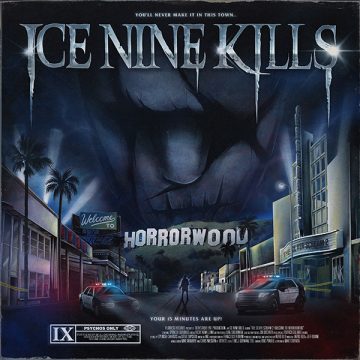 If there’s one thing Ice Nine Kills fans know, it’s that the band consists of visionary trailblazers and gifted multimedia storytellers, who have crafted to perfection the art of taking some of the most memorable horror films of all time and mesh them together with metal music, to create some of this generation’s most brilliant musical masterpieces.

The Silver Screen 2: Welcome to Horrorwood is the highly anticipated sequel to 2018’s Silver Scream, and was inspired by favorites such as American Psycho, Cabin Fever and Resident Evil. In August 2021, the band released a teaser video that featured the tracks from the album, which lead fans to speculate the horror/thriller movies that inspired each track. Four singles complete with exceptionally creative videos followed, with clues to the murder mystery, labeled Exhibits A-D, E being revealed day the album is released. The story has front man Spencer Charnas as the main suspect in his fiancé’s brutal murder.

“Welcome to Horrorwood” sets the tone with “sit back for the sequel of your dreams” then “Assault & Batteries” comes complete with taunting doll voices and some humorous lyrics “you won’t ever grow up/you won’t make it past six/cause this two foot tall demonic doll will make you his bitch”.

The entire album explores some of the best horror films, and then wraps up nicely with the story of the Candyman, ending with the soothing buzzing sound of the bees. This album is the hard core exception to the general rule that “sequels suck”.

Melinda is a music enthusiast from the US who grew up on vinyl in the 70s and 80s. She's a lover of all genres, but rock/metal runs through her veins. Music is always in the background and in her head. Unfortunately, she has to have a "regular 8-5" job since "Professional Concert Go-er" doesn't pay the bills. Her bliss would be to follow more musicians and bands than "People she may know" on social media. Her ultimate long term goal is to be the old lady just enjoying the show down in front at the barricades at live shows. Her favorite quote is "Where words fail, music speaks".
RELATED ARTICLES
album reviewalbum reviewsfearless records
9.0