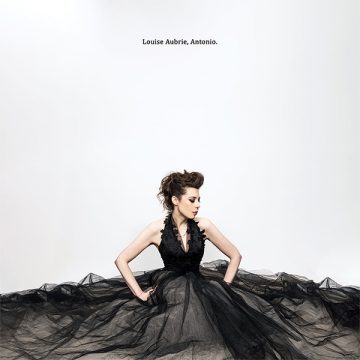 If you think that the cover of Louise Aubrie’s fifth album Antonio looks like the cover of Pet Shop Boys’ album Actually, you’d be perfectly right. That is exactly what Aubrey is paying homage to.

At the same time, it can certainly give you an indication of which direction the music on the album is going. However, even though Pet Shop Boys were always more than just a ‘simple’ electro pop band, Aubrie is not, and that is where the title of Antonio comes in. “The title is inspired by a line from the Jacques Brel song “La Chanson De Jacky”: “Même si on m’appelle Antonio” – “Even though they call me Antonio”.”

You can certainly categorize Aubrey’s music on Antonio as thinking person’s pop, with some intricate elements that stretch the standard pop formula cropping up throughout the album, from the opening “Ours”, through the excellent, guitar-driven “Home” to closing “Lies”.

Throughout the album Aubrie is supported by a stellar cast that includes her mentor Boz Boorer, who is quite familiar to fans of the artist, who goes by the name of Morrisey.

But above all, Antonio is Louise Aubrie’s show, and quite an accomplished pop album at that.