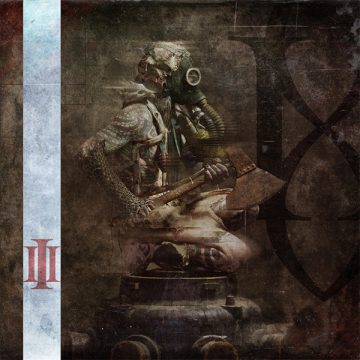 L.A. alternative metal band Gemini Syndrome has just released the long-awaited final chapter of their debut trilogy of albums, 3rd Degree – The Raising. The first two albums, 2013’s Lux and 2016’s Memento Mori both told the story of the painful struggles of life and death. After Memento Mori, the band took a break from touring and recording. The final installment is about death and rebirth.

Back from hiatus, the band shares their experiences with suffering from past mistakes, spiritual growth and rebirth with this album, their darkest and heaviest to date. ”Reintegration”, released in late 2020, is the perfect lead track, with the idea of crossing from death to rebirth and integrating with our true self. The whole album can be felt with just this one song, however the entire album shows us that the band has outdone themselves with front man Aaron Nordstrom’s powerful vocals and Meegs Rascon’s beautiful yet sometimes haunting guitar performances. The beginning of the album has such a heaviness that “Sum Quod Eris”, which translates to “I am what you will be”, almost feels like the light at the end of the tunnel. The robotic voice in “Fiat Lux”, the closer, is a little unnerving, not being able to fully decipher what it’s saying, but picking out words and phrases, in the end you can hear the mention of “Reintegration” which brings you back to what this album is all about.

Melinda is a music enthusiast from the US who grew up on vinyl in the 70s and 80s. She's a lover of all genres, but rock/metal runs through her veins. Music is always in the background and in her head. Unfortunately, she has to have a "regular 8-5" job since "Professional Concert Go-er" doesn't pay the bills. Her bliss would be to follow more musicians and bands than "People she may know" on social media. Her ultimate long term goal is to be the old lady just enjoying the show down in front at the barricades at live shows. Her favorite quote is "Where words fail, music speaks".
RELATED ARTICLES
album reviewalbum reviewscentury media records
8.0