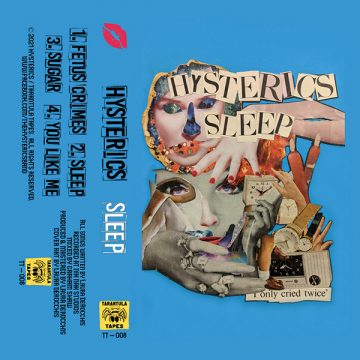 Returning with their sophomore EP, Sleep, Newmarket, ON- based Hysterics is returning with an unrelenting and uncompromising punk record. Following 2018’s Anatomically Correct, the independent band have teamed up with Tarantula Tapes to deliver Sleep on digital formats along with a limited run of cassette tapes.

Sleep opens with the roaring feedback of “Fetus Crimes”. Matching the aggressive tone of the title, the performance from the band is a sonic onslaught that, despite its raw appeal, does not sacrifice melody. Furthermore, the track features a weaving guitar solo that adds a hint of variety to the thrashing power chords. The EP continues with the rhythmic up-tempo of the title track. Where “Fetus Crimes” is much more in tone with the underground punk bands of LA in the ‘70s and ‘80s, “Sleep” feels reminiscent of Nirvana with a slight shift in dynamics between the verse and chorus, along with vocals that capture a similar throaty rasp to that of Kurt Cobain.

Doubling down on their punk roots, “Sugar” delivers a relentless pulse led by a dissonant guitar that cuts right through the air, similar to 45 Graves’ “Black Cross”. If such a comparison isn’t enough to paint an image of the visceral tone of “Sugar”, this song absolutely rips. “You Like Me” brings the album to a close in a pure abrasive and thrash punk fashion. This is as close to hardcore as Hysterics gets but brings Sleep to an explosive and climatic close.

If Brody Dalle fronted Nirvana in their earliest, grimiest days, you would have Hysterics. Without a hint of pop, Sleep brings a wave of raw and gritty punk rock in its purest form. Within only four tracks, Hysterics have very well become my favourite new punk band and Sleep will likely remain on repeat for the foreseeable future.

A passion for music has always been a part of Gerrod’s life. As a young boy, he was raised on a steady diet of the music from The Chili Peppers, Aerosmith, The Stones, Prince, and others from his mum. Raised in the GTA, Gerrod continued to foster his love for music by attending a wide range of concerts and learning the drums. His unapologetic passion for music has no bounds and has spread to a wide variety of styles, whether it be the 90’s rock that sound tracked his teenage years, the jazz he studied in university, or his newfound love for hip-hop. He recently received his bachelors in music and education from York University and is passionate about writing and reviewing good (and less than good) music. Gerrod is also the drummer and songwriter for a Toronto based rock & roll band, One In The Chamber.
RELATED ARTICLES
album reviewalbum reviewssleep
7.0