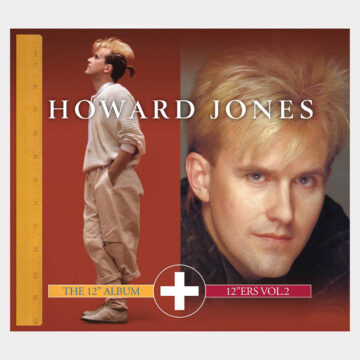 Cherry Red continues to mine the Howard Jones catalogue and has come up with another brilliant release. This time they have taken the album The 12” Album, originally released in 1984 between his debut album (Human’s Lib) and his very successful second album (Dream Into Action). Originally, perhaps a stopgap release between studio releases, but The 12” Album was extremely well received and a well put together album. The band has combined that album with a second album, 12”ers Vol 2, which was originally released in Japan due to the unexpected and huge success of The 12” Album. Now fans can get both albums together. The fact that almost all of the songs on CD one have never been released on CD is going to entice fans to want this release. Secondly, most of the world has never heard the second CD.

Howard Jones is known for his early electro beat music. He was a staple on the radio in the 1980s with a significant number of hits. But the genius of Jones was his more experimental side, where he could set aside the commercial element and do as he pleased. Those songs, usually buried on B-sides, are wonderful to hear, but he also utilized his 12-inch format to not only expand the song for dance, but to experiment as well. With the 12 inch format, he was able to expand and explore. He would maintain the basic melody and framework of the song, but he would manipulate the song and make it not only interesting, but in some cases, better than the original.

For example, “Life In One Day (Part 2)”. Mainly instrumental, the song is deconstructed and put back together in a very unique and interesting way. It may be over seven minutes, but that seems to fly by very quickly. The same can be said for many of the mixes. “Look Mama (RH Version) (aka U.K. Extended Version)” clocks in at just over nine minutes, and the listener is glued to the song for the entire length. There are some seriously dark and eerie moments in this mix which is quite brilliant. Meanwhile Jones dips his toe into jazz with “You Jazzy Nork!”.

This CD set is really perfect reliving those great days of imaginative 12-inch remixes and exciting music. One can see how artists, like Howard Jones, could use the format for experimentation and exploration. For Jones, the 12-inch format was useful as a promotional tool and to sell more records, but very quickly he was able to use the format to further his music. Things he would use in 12-inch singles would pop up on future albums, so it was a chance to delve into his music and bridge the avant-garde and pop music. The 12″ Album & 12″ers Vol 2 is a great collection and another grand reissue from Jones.