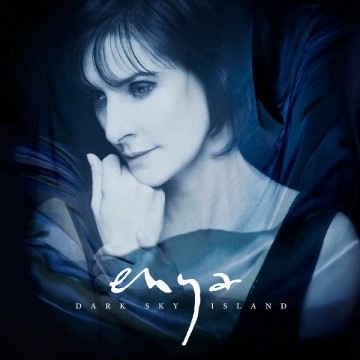 Enya’s first album in seven years is a soft-spoken refusal. She refuses to ignore the pulsating melodrama she witnesses all around her. It’s always there; in every sky-scraping star, in every thorny bramble, in every churning ocean tide. But unlike these natural processes that she so fervently admires, Enya herself refuses to change. Dark Sky Island sees the 54-year-old Irish singer-songwriter returning once again, in pilgrimage, to the crumbling well of new age ambience. And on this particular visit, we must peer inside the pit, and travel 25 years backward to when her seminal work, 1988’s Watermark, was released, and see what has changed, and what has remained the same.

Enya’s music has always tried to bridge the distance between the imagined and the real, using natural metaphors and theological allusions to augment her reverberant singing. That doesn’t change here, and perhaps this is a problem. Even as a fan of ambient and chamber music, I believe Enya has surpassed both of those genre classifications – Dark Sky Island is, more often than not, as potent as Ambien.

Opener “The Humming…” doesn’t set the tone as much as call back to Watermark’s subtly menacing “Cursum Perficio,” and second track “So I Could Find My Way” follows in similar fashion, doing an enervated re-enactment of her magical 2000 track “Only Time.”

At the middle of the album lies “Echoes in the Rain” which finally brings the pace back up, only to stifle its potential by having a lyric sheet littered with inanities.

“I Could Never Say Goodbye” is paced like a church elegy, has a gorgeous backing choir, and focuses heavily on absence, on isn’t-there-anymore-ness. It’s a sad song about love and loss, sure, but fails to strike the stone heart with nearly as much oomph as some of Enya’s 1988 tracks like “On Your Shore” or “Exile,” which exist always down the hall, deeper into the forest, Enya’s voice on the precipice of evanescence.

Titular “Dark Sky Island” is one of the most amorphous tracks on the album, with humming and instrumentation following one another like two mating birds. However, the connection between this track and Sark Island (purported source of inspiration), is thoroughly unclear.

The constrained vibrato on “Astra Et Luna” is a string-backed variant on the same listless, compassionate song style Enya has used for years; only this time, due to chord progression, it has a throbbing ecclesiastic connotation.

“The Loxian Gate,” with its thundering drums and airy strings, is the most interesting song on the album, far surpassing the banality that precedes it. “The Loxian Gate” wears a different badge than the other 10 tracks because it resists, albeit weakly, Enya’s typically soothing songwriting; here she uses her mouthless mutterings to engage with conflict instead of describing it superficially from a birds-eye view. It exists inside of a glorious moment.

Closer “Diamonds On the Water” provides us with the line “Listen to the river/It echoes softly/Drifting in my memories/The sound of summer” and is followed, a minute later, by deh-dah-deh ablaut. What’s interesting is how little this differs from the deflated-balloon “yeah” “whoo” and “na-na-na” chorus-centric pop songs that are consistently lambasted for being insubstantial. Should Enya’s Dark Sky Island be credited as anything more than self-derivative aestheticism? I’m not sure. It’s certainly the first time her music has provoked this consideration from me.

What’s most disappointing about this album is that the windswept heights of Watermark’s “Orinoco Flow,” shifting contemplations of “Evening Falls,” and bubbling language-less soundscapes of “The Longships” are never reached. It seems that, 25 years on, Enya has drawn nearer to her musical freezing point. This album is for two discernable demographics: sleepy quinquagenarians and yawning infants. In this way, and this way only, Dark Sky Island is a universal piece of art.