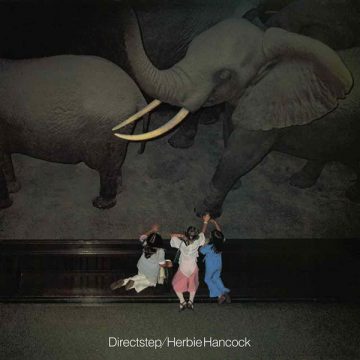 Herbie Hancock
Directstep (Reissue)
Get On Down

Originally released in 1979, Herbie Hancock’s Directstep has enjoyed an interesting and unique history. Aside from being released exclusively in Japan, the album was recorded with the new ‘Direct-To-Disc’ recording technology. This method recorded masters in real time to acetate discs, rendering incredibly high fidelity LP pressings but sacrificing the ability to edit or overdub. As a result, Hancock, along with Bennie Maupin on saxophone, Ray Obiedo on guitar, Webster Lewis on keys and synths, Paul Jackson on bass, Alphonse Mouzon on drums, and Bill Summers on percussion, stepped into Tokyo’s CBS/Sony Studios mid-October of 1978 to make a legendary three-track album, recorded live off the floor, in one take. Now, remastered and released worldwide, Directstep is a bit of unearthed treasure that provides a better scope at Hancock’s artistic trajectory and range from a highly creative period during his illustrious career.

“Butterfly” opens the record with a near eight-minute, proto-smooth jazz voyage that, on the surface, seems like a simple enough passage of music, but in actuality, is overflowing with complex rhythms and rich harmonies. The track picks up with a tempo change that propels the song from its soft swaying feel – a psychedelic disco, if you will – into an up-tempo Latin-funk groove. The track is reminiscent to Hancock’s 1966 “Maiden Voyage” but verges on a more technical side while embracing a number of stylistic influences from popular genres of the time to seamlessly create a unique track that is as creative in its songwriting as it is in the musicianship of the performance.

Much like “Chamelon” and “Watermelon Man” – both from Hancock’s quintessential and groundbreaking 1973 release, Head Hunters – “Shiftless Shuffle” digs deep into both funk and the blues to deliver a heavy shuffle that grooves hard. Seamlessly, and without skipping a beat, the track jumps ahead into a slick double time solo section, keeping its momentum with a straight ahead funk driven pulse. While this is similar enough in structure to “Butterfly”, it is important to remember that this was done live, on the fly, and likely with minimal – if any – rehearsals; ultimately making such a shift a testament to the musicianship from each member of this ensemble. This is only further as they dive head first with no seatbelt into a jaw dropping solo section – not only did they absolutely nail the transition, but they did so confidently and performing music of a complex nature without even a hint of faltering.

Directstep comes to a close with the epic, fifteen-minute long, “I Thought It Was You”. While originally released on Sunshine the year before, this version of “I Thought It Was You” features Hancock’s smooth vocal melody that is run through a vocal synthesiser known as a vocoder to give the song a more electronic and experimental textural pallet. The track is a bouncy number that delivers a more sophisticated approach to disco without sacrificing a level of groove or catchiness.

It goes without saying that Hancock is synonymous with musical ingenuity; however, Directstep gives a deeper look at the innovation of his writing and performance from a brief period that, with the exception of Japan and jazz collectors who search out and covet such rarities, was generally hidden from his legacy. Directstep is a record driven largely by pulses and grooves of funk, soul, disco, and pop of ’79, but applies a rich level of jazz sensibilities and improvisation in a manner that only Hancock could do. As a result, over the course of its three songs, Hancock and his phenomenal band soar magnificently through the twists and turns that make Directstep such a unique and conventionally unconventional record.

A passion for music has always been a part of Gerrod’s life. As a young boy, he was raised on a steady diet of the music from The Chili Peppers, Aerosmith, The Stones, Prince, and others from his mum. Raised in the GTA, Gerrod continued to foster his love for music by attending a wide range of concerts and learning the drums. His unapologetic passion for music has no bounds and has spread to a wide variety of styles, whether it be the 90’s rock that sound tracked his teenage years, the jazz he studied in university, or his newfound love for hip-hop. He recently received his bachelors in music and education from York University and is passionate about writing and reviewing good (and less than good) music. Gerrod is also the drummer and songwriter for a Toronto based rock & roll band, One In The Chamber.
RELATED ARTICLES
album reviewalbum reviewsget on down
8.0