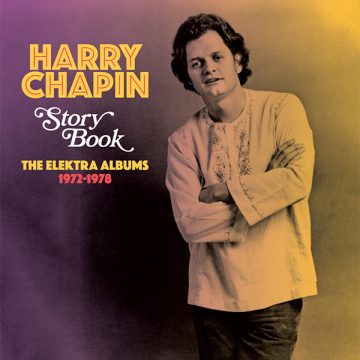 This one is for the fans. Reissue and box set specialists Cherry Red Records have blessed the world with an expansive six-disc collection of the music of Harry Chapin. The American singer-songwriter pushed the limits of the folk tradition’s ‘story song’ from his first album release in 1972, until his untimely death in 1981. Musically complete and lyrically rich, Chapin’s songs were often about average, everyday people. While he did not garner a lot of critical praise in his lifetime, Chapin developed a very loyal fan base.

Centring on the music from Chapin’s Elektra Records era, this collection is something special. As “the first serious, multidisc reappraisal of Chapin’s work”, Story Book contains re-mastered versions of the nine albums that the artist recorded for Elektra. It is beautifully presented with album art, photos and promotional materials from the period, as well as contextual notes by Charles Donovan.

It is an interesting exercise, reviewing a box set of reissued music. What are we reviewing?  The artist made his statement years ago. This music was great back in the day, and it remains so (however stylistically dated) in 2022. This retrospective is presented in an attractive package and the re-mastered recordings are excellent. The real achievement here is in the compilation and release of all of this material together – as a collection for fans, an archive for students of traditional song craft, and a gift for children of the ’70s.

It is wonderful to hear Chapin’s voice again, performing familiar favourites such as “Taxi”, “W.O.L.D.”, and “Cat’s In The Cradle”, as well as deep album cuts, and selections from later, less popular releases. Also fascinating is being able to witness the arc of Chapin’s development as a writer and performer. Subtle production changes can be heard from album to album. Influences and sonic trends of the era came and went, and this is reflected in the recordings, which progress from pared-down folk guitar, to sweet piano and cello, urban grit, and sophisticated pop.

Chapin toured tirelessly with his band throughout the 1970s and toward the end of his life, became an anti-hunger lobbyist and activist, in addition to his work in music. Since he passed in 1981, in a tragic motor crash at age 38, we can only speculate on what his future might have been. Thankfully, we have this collection to enjoy, ponder, and to give comfort, reminding us of simpler times.

Bryan Williston has been involved in music since he was a young child. A veteran singer, songwriter, and music educator, Bryan has enjoyed playing a multitude of musical genres in a variety of outfits, over the years. Bryan lives in Whitby, Ontario.
RELATED ARTICLES
album reviewalbum reviewscherry red records
9.0