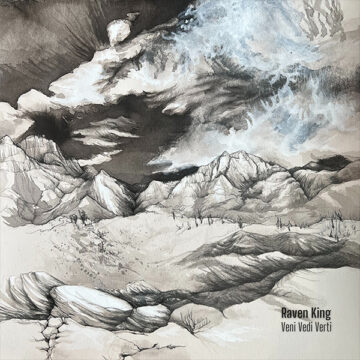 Although Raven King declares itself as having grunge tendencies, the new album Veni Vedi Verti is far from that genre. In fact, it’s unorthodox and to be honest, has a sound of its very own.

The LP begins with “Western Wind”, a track that features a snappy guitar riff. The bass carries the song in strong fashion in the verse as the guitar pauses and plays intermittently. The solo at the 3:37 mark is quite ostentatious.

Perhaps the most grunge-like song on the album is “Scot Free”. It features a dirty, distorted, guitar tone, something that isn’t noticed on any of the other tracks.

Lead single “The Great Divide” was inspired by Gerrit Curti looking up at the moon and seeing the visage of a skull. He had the idea that this image was a “beacon” for the dead and that ghosts were magnetically attracted to the moon.

This LP has a formula, a formula that the Raven King duo doesn’t stray far from. Many of the songs feature indie-style guitar riffs that pause during the verse. During the pauses, the bass fills in when the guitar is absent.

Overall, Veni Veti Verti is something different. Again, the formula doesn’t change. It remains consistent throughout this record. With that said, the listener may grow tired of said formula. It is a formula which works well but would work even better if it was abandoned every now and then.