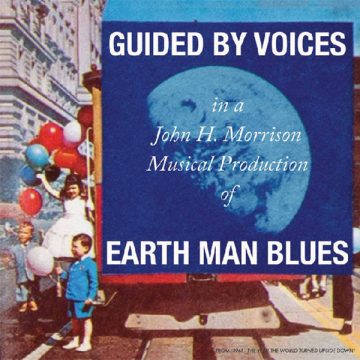 “A collage of rejected songs” is how Guided by Voices’ Robert Pollard describes Earth Man Blues which sounds, y’know… not great, Bob. This humble, tongue-in-cheek sentiment runs the risk of being a freebie for his detractors or people who assume that the band stopped putting out records in the ‘90s. However, anyone who knows anything about Pollard and Guided by Voices is wise to the fact that one band’s trash is another’s stone cold hit, and the curious will be rewarded with one of the more excitingly experimental, weirder albums in the band’s discography.

For Earth Man Blues, Pollard dived into his archive of unfinished songs and neglected demos that didn’t find a home on previous releases. Incidentally, this record is the band’s 10th in five years, and 33rd album overall. Upon revisiting these forgotten songs, Pollard realised there was actually a lot of potential in them and decided to rework them, or leave them as they were to be punched up by his bandmates and producer, Travis Harrison. The songs were tied together thematically in such a way that the final sequence ended up reminiscent, to Pollard, of a musical stage production. With the addition of characters, places and events from his childhood and the cover art styled as though a playbill from John H. Morrison Elementary School, this could be seen as a rare Guided by Voices concept album.

Earth Man Blues is an album of tremendous depth. While it has the distinctive sound of the current Guided by Voices line-up, for the most part it sounds like nothing this or any iteration of the band has done before. “The Batman Sees the Ball” could be a companion piece to “Street Party” from 2019 album Sweating the Plague, but is immediately followed by “Dirty Kid School”, which features an unexpected orchestral interlude arranged by Doug Gillard and seemingly inspired by West Side Story, finger clicks and all. The theatrical flamboyancy continues throughout the album, prominently on “Lights Out in Memphis (Egypt)”, which begins as a fairly standard Guided by Voices song until Pollard’s spoken word vocals come in like the voice of God, before building into a synth-laden epic sound collage that is just crying out to be heard live. “Child’s Play”, the album’s closer, will also be sure to blow minds when live music returns, with Kevin March’s driving beat and Gillard’s mania-inducing shredding showing no mercy. “Trust Them Now” is the band at its best. A pure pop delight that motors along with haste, not wasting a second of its two minutes. It is wild to think that such an immediate earworm was originally in Pollard’s discarded pile, which poses the question – what other gems might we be missing out on?

In addition to the Guided by Voices output, the last few years have seen the band take on other projects together; an EP and upcoming LP under the name Cub Scout Bowling Pins and several records as Cash Rivers and the Sinners. Being absolved of the expectations that come with the Guided by Voices name has perhaps given the band more creative freedom and allowed them the confidence to be more playful with their sound, which is highlighted on Earth Man Blues. Their ability to hop from one genre to another without the transitions sounding jarring, often aided by use of samples, is a testament to the band’s experience coupled with Travis Harrison’s instincts and ability to make Pollard’s increasingly ambitious ideas come to fruition.