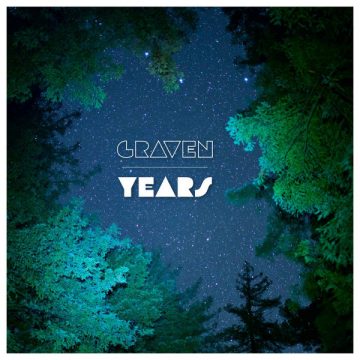 Some records are a perfect reflection of their times, and Years by Graven, also known as Matty McKechnie is one such collection. In this, his 11th release, he solidifies his reputation as one of the most direct and honest artists around. With his warm acoustic guitar and baritone voice singing songs that are like conversations, Years is one artist’s recipe for understanding this modern world.

Graven kicks things off with “Legend of You”, a manifesto-like declaration in the form of an open letter to the President of the United States. Tracking like a poetic Wikipedia entry, it appeals to the president’s humanity, wondering what happened to make him behave as he does. The sound is full and the message is strong.

If Graven’s message is at times political, it is about the politics of the human condition. This is really his stock-in-trade. Whether in the hopeful tone of “Nightsparks”, the wonder of parenthood in “Sloan”, or the spiritual search of “Hymnal”, connecting in a human way is central to Graven’s work.

On the surface, these are straight-on acoustic songs with solid guitar, bass, drums, and keyboard embellishments, but their simplicity is deceiving. Produced by music creator and multi-instrumentalist Jim Bryson, who famously collaborated with The Tragically Hip, The Weakerthans, and Kathleen Edwards, to name a few, this collection is sonically stunning. The elements are all there, and they work together beautifully.

It is interesting how a seemingly incidental piano or synth part, an up-front drum sound, or ethereal haunting backing vocals conspire to complete a recording. Graven’s songs are strong on their own, but Bryson’s production completes them, and gives them heavenly elevation. The song is the anchor, Graven’s performance is the sail, and Bryson’s production is the wind. Go get this music now.

Bryan Williston has been involved in music since he was a young child. A veteran singer, songwriter, and music educator, Bryan has enjoyed playing a multitude of musical genres in a variety of outfits, over the years. Bryan lives in Whitby, Ontario.
RELATED ARTICLES
album reviewalbum reviews
7.0