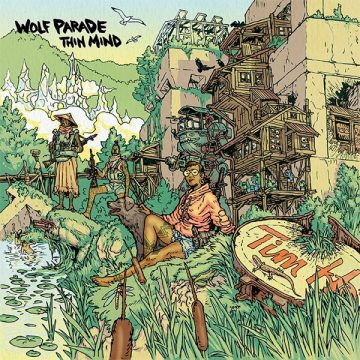 In a rock world where most of our bands are drifting to harder sounds yet combining other genre influences to create a different listening experiences, it seems that the indie genre is punching a hole in the scene and is making a comeback in 2020. For Wolf Parade, Thin Mind is coming to the forefront and is out to make a huge impression for the indie genre.

From the beginning, we get a beautiful infusion of ‘80s synths and ‘90s MIDI instrumental bliss, accompanied by euphoric guitar work and throwback indie rock flavors that will keep a listener engaged for what’s to come for the remainder of the album.

We then come up to the hit single “Julia Take Your Man Home” a track that is bursting at the seams with captivating synth and MIDI elements injected into handsomely-crafted guitar riffs perfused with deep hard-hitting drums. It’s easy to tell why this is the single as it is hands down one of the most dynamic and impressive tracks featured on the album bar none.

The album continues to delight our ears with creative use of synths, brewing with massive jangled alligator guitar riffs and effective atmospheric drum-work.

“Out Of Control” stands out for its slower, denuded energy but is still a massive sonic experience instrumentally. Vocally is also where “Out Of Control” exposes itself as it exudes a very Thom Yorke aesthetic that isn’t really featured on the other tracks. It proves that the band is willing to branch out in the album and create other eccentric and immersive sounds while still not losing their vision of the sound they have created on Thin Mind.

This is an album that has gone above and beyond the release of 2017’s Cry, Cry, Cry. Wolf Parade has always made a consistent effort to deliver some amazing panoramic indie rock soundscapes that constantly prove why they deserve more praise. But Thin Mind takes things instrumentally, lyrically, and vocally down the rabbit hole and has come back to the surface with a more bona fide and infectious sound.  For fans of indie bands that really go above and beyond to create a reveling experience for your ears, give this album a listen.