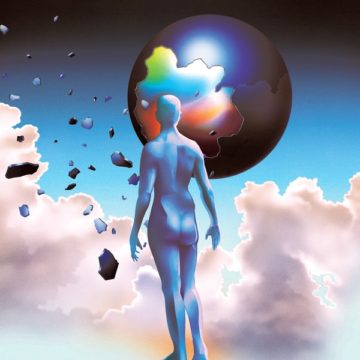 After years of mix-tapes and EP’s fans of EDM artist Giraffage were finally given his debut LP Too Real on October 20th, 2017. The album gives the listener a wide variety of melodies that surely will be sticking in your head for weeks to come. Too Real not only keeps your head bobbing but gets more personal for the artist with limited but powerful auto vocals to help convey emotions and moods to the listener. This album should please longtime fans while also giving enough variety. All listeners of EDM should find something they enjoy on this release.

Giraffage has a great talent for balancing moods within his songs as they seem to dance from emotional slow tempos to booming club bangers to everything in between. “Earth” is a prime example of this as the song jumps from a soothing melody to a heavy hitting banger only to end somewhere in-between. This works in it’s favour instead of causing an identity crisis for the song. The unique flow keeps a level of excitement to the album. In the end EDM stands for electronic dance music and these changes in tempo would keep the dance floor alive with the joy of constantly changing speeds. “First Breath” pulls a similar style in changing tempo consistently, seeming to draw you with it’s orchestral opening seeming to lead to a metallic drop only to pull a fast one on the listener with bouncy techno beats coming into play. Although odd, the shift works and showcases Giraffage’s talent.

The album is sure to keep the dance-floor going strong, but for listeners wanting something they can sit back and reflect on life with, it succeeds as well. “Fall Slowly” is the emotional peak of the album calming the tone of the listener half way through the album. Using an atmospheric auto tone voice and a almost lullaby-esque beat, it simply draws you in and you’ll find yourself re-listening to it whenever you need to calm your mind.

Too Real is the debut LP fans wanted excellently showcasing Giraffage’s strengths while expanding on what he’s already learned from years of making music. Anyone who calls themselves a fan of EDM needs to give this album a shot.