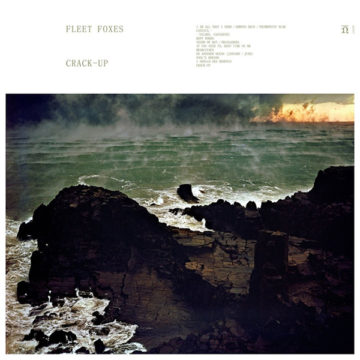 The core of the band are back.  Robin Pecknold (vocals, guitar); Skyler Skjelset (guitar, vocals); Casey Wescott (keyboards, vocals); and Christian Wargo (bass, vocals). The four have been together since 2008, when Christian joined Pecknold, Skjelset and Wescott, who formed the band in 2006.

This is not a criticism. This album is full of beautiful melodies, harmonies and songs that will make your heart break. The thing is, Fleet Foxes do it so well. Listen to the harmonies of “Kept Woman”, focus on the song’s structure, the melody and the production. If Crosby, Stills, Nash and Young were starting out today, they would sound something like Fleet Foxes.

The beauty of this album is their ability to be stripped down (such as the song “Fool’s Errand”) and also be almost orchestral sounding in their production (their first single from the album, “Third of May / Ōdaigahara”) without being a distraction to the listener. The songs simply flow together and all fit.

And as with any well produced album, the sequencing of songs are perfect, and they all lead to the wonderful, stunning last track, “Crack-Up”, which borders on being a sound collage, but again, they know how to stretch a song for so long without losing the beauty and structure of it. And lyrically it is heartbreaking. “All I see, dividing tide rising over me…Ooh will you wait, you, alive” is almost chanted over and over at the end of the album, then the album closes with the sound of people walking away. Brilliant.

Through it all are beautiful vocals and emotional melodies. This is the bands trademark, of sorts. But it is the way the vocals are recorded, at times it sounds like they are lost in the wilderness, and you have to strain a little to hear all the words. The layered harmonies impact as well. Simply stunning.

So, after a six year wait, Fleet Foxes are back and it was well worth the wait. Crack-Up is a  brilliant album. My only worry is that we mayhave to wait another six years for ther next release. Let’s hope not.

Born and raised in Whitby, Aaron discovered music through his love of The Beatles. This led to a career in radio, writing for various publications, and ultimately a radio show about The Beatles (Beatles Universe), which ran for over four years. When not immersed in music, Aaron enjoys spending time with the loves of his life -- his wife Andrea, and daughters Emily and Linda (all of whom have an intense love of music too).
RELATED ARTICLES
album reviewsfleet foxesnonesuch records
8.0