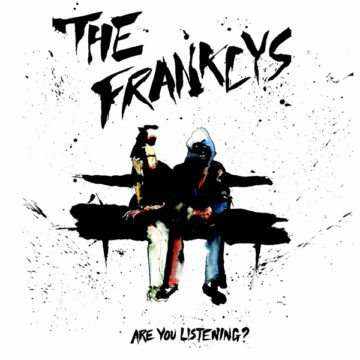 Are You Listening? is the debut album from The Franklys.  The band is made up of guitarists/vocalists Jennifer Ahlkvist and Fanny Broberg (from Sweden) and bassist Zoë Biggs and drummer Lexi Clark (from East Anglia).  Together they have come together and recorded an album that, as the title suggests, demands your attention.

The album explodes with energy from the first track, “Castaway”.  Are You Listening?  How could you not?  The album is relentless.  There is a great deal of energy in this band and in the songs.  The band attacks every song as if it is life or death.  This is not a criticism, this is the attitude that has served many bands very well.

The genre of music is hard to define.  Punk?  Hard Rock?  Heavy?  Garage?   All are elements of the music, but there is so much more.  There are guitar solos, there is a thunderous noise, so trying to pigeonhole this band is not really the issue.  They make their own sound their own way.  But I will say, fans of punk will enjoy Are You Listening?.

This is a talented band, each member is highlighted and the vocals are strong throughout.  The band produced the album with help from the Graveltones and Sean Douglas.  Even with so many producers, they manage to keep the edge of their music on the record.  Sometimes with so many people producing, the sound of the band can be somewhat compromised – not so with this album and band.  Without recording a live album, they achieved the sound and excitement of a performance on this album.

Where this album excels is in songs such as “Keeper”, where the band is not afraid to tone down the energy and present a different side to the band.  Not that this is a sappy ‘metal’ style ballad, but rather a slower, quieter song.  And still, there is the energy and the intensity that is found throughout the album.

Overall, an impressive debut album, from an impressive young band.  The Clash once wrote “The future is unwritten”, this band has adopted this attitude and will be writing their future.  My only request, please come to Toronto for some live shows.

Born and raised in Whitby, Aaron discovered music through his love of The Beatles. This led to a career in radio, writing for various publications, and ultimately a radio show about The Beatles (Beatles Universe), which ran for over four years. When not immersed in music, Aaron enjoys spending time with the loves of his life -- his wife Andrea, and daughters Emily and Linda (all of whom have an intense love of music too).
RELATED ARTICLES
album reviewsare you listening?bad news
9.0