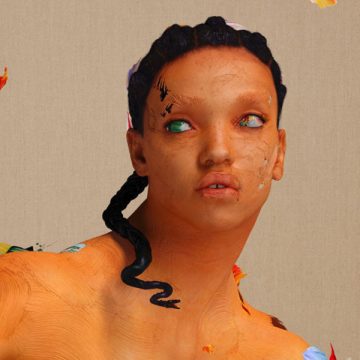 An endowed mystical creature, a gentle sensory eargasm, and a wholesome spirit: this is the talented artist FKA twigs. Renowned for her otherworldly voice and totally idiosyncratic identity, this is the second release for singer-songwriter Tahliah Debrett Barnett, known professionally as FKA twigs.

Recently, Barnett suffered professionally a lack of confidence, partially due to a breakup, as well as laparoscopic uterine surgery. FKA Twigs emerged from her literally wounded womb in order to reconnect with her goddess-like feminine self. Her personal battle and empowerment are adroitly reflected here in Magdalene. The project itself sounds like a deep sigh of relief, illustrated via otherworldly experimental sounds and her angelic voice, compiled into a sacred ritual performance.

The biblical figure of Mary Magdalene takes a central role on the album as a guardian of hope and a signifier of women’s power. The centerpiece “Mary Magdalene” is a thrilling ritual of “woman’s work”, tied by the echoing bells in the background. Through the ambient piano sounds in “Cellophane”, Barnett’s eerie voice of sorrow conveys the tones of heartbreak, while UFO-like noises articulate the artist’s signature quirkiness. FKA twigs’ ability to mix genres results in her feature with rapper Future ,resulting in “Holly Terrain”. The song appears at first sight to be an attempt for a mainstream banger, but the unique “twig-ism” stands out with the implementation of a rich gamut of architecture,d individual parts such as 808 snare drums, vocal stacking, and even a Bulgarian folk sample.

Magdalene goes beyond earthy boundaries and transcends to a celestial realm of greatness, guided by the “fallen alien” – FKA twigs.

Eleonora (a.k.a. Ellie) is a freelance music writer. Her work is dedicated to exploring the intersections between sound and culture. At the moment she is embracing the digital nomad lifestyle, while travelling the world and documenting the music and cultures she encounters.
RELATED ARTICLES
album reviewalbum reviewscellophane
8.0