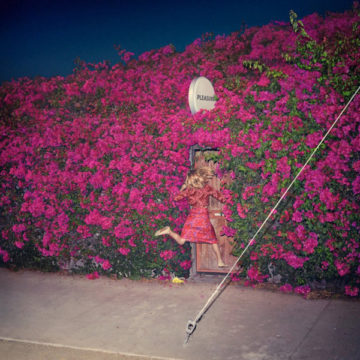 Following up from her Polaris Prize-winning last album, Metals, Pleasure builds on Feist’s intuitive depth as an artist. Through haunting vocals, ambient samples and percussive, quixotic guitar licks Feist, once again, draws her listener into her world of genius musings, self-reflection, and musical co-creation. She comforts us, while pulling at us in unexpected ways. Her portrait in the press release fittingly recalls Frida Kahlo, another pioneering,  raw artist.

Pleasure is sparser than Feist’s last two albums, with a greater sense of space and reflective pacing. Playful, percussive vocals build on newer, harder themes – an echo of what Feist explored in Metals. She touches upon so many musical styles it’s aurally fascinating. Whispers of African guitar, the Blues, Neil Young, as well as Feist’s roots as a singer in a Calgary punk band can be traced throughout the 11 songs.

The water-themed lyrics, lush vocal harmonies and ambient samples on “Get Not High, Get Not Low” along with the deep bass guitar, steady percussion and warmth of “The Wind” recall Feist’s older repertoire. Her guitar picking on “Get Not High, Get Not Low” and quirky vocals in “A Man Is Not His Song” is refreshing. Feist’s singing at the end of “Pleasure” and, to a lesser extent, “I Wish I Didn’t Miss You,” “Any Party” and “I’m Not Running Away” have a Peaches-esque vibe to them while her vocal distortion in “I Wish I Didn’t Miss You” is hypnotic. “Lost Dreams” floats between a slowed down African guitar lullaby to a rock infused climax. The sing-along chorus at the end of “Any Party,” and sample of “Pleasure” blaring from a car passing by, gives the listener a window into a the life of Leslie Feist.

Feist’s raw arrangements in Pleasure bring a more exploratory departure from her previous albums with an edgier vision and endless layers of discovery interspersed with her usual nod to Mother Nature. Pleasure is spell-binding.

Talia Wooldridge is an avid music lover, composer and ethnomusicologist who contributes artist interviews, live concerts, festivals and album reviews for Spill Magazine. She has written extensively on the intersection of music, personal identity and cultural symbolism with an early focus on Latin American Hip Hop and female Cuban rappers. In her spare time, Talia writes, composes music and manages Music Can Heal, a non-profit that brings live, award-winning musicians to inspire healing in hospitals, hospices and communities in need. Her next project is an interactive music-travelogue exploring music cultures and music travel around the globe. Follow her here: www.taliawooldridge.com + www.movetoyourownbeat.com.
RELATED ARTICLES
album reviewsfeistinterscope
8.0