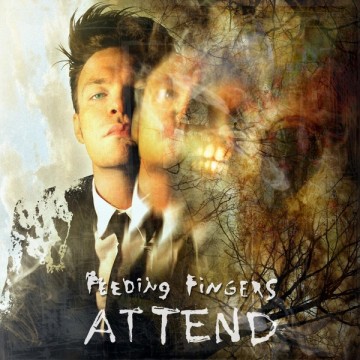 Feeding Fingers
Attend
Sounds For Sure

With 25 songs and a running time that passes the two-hour mark, Feeding Fingers latest release, Attend, seems a tad daunting. However, the diversity of the material makes the time float by.

After wrapping up the tour for their 2013 release, The Occupant, Feeding Fingers’ frontman, Justin Curfman, was an emotional wreck. His private life was beginning to come undone which was causing delay of the writing process for the next album.

When he returned to his home in Germany, Curfman cleared his mind by researching musicology and music history as a part of the writing process for what would later become Attend.

The album begins with “Your Candid Laughter Crawls” a post-punk track, featuring the eerie chimes of a kalimba. The intro sounds like a soft, slightly twisted, lullaby that sets the scene for what’s to follow.  Although the kalimba was briefly heard on The Occupant, it makes several appearances on the album, distinguishing this album from their past discography.

We see early on that Curfman has matured as a composer, as Attend offers a variety of material that transcends the typical post-punk tracks that can be found on their earlier works. While this definitely sounds like Feeding Fingers album, songs like “Abrasive Remains Lubricate Me” and “Survive Bliss” bring a Romanian gypsy feel to the table that offer a freshness to their music.

Instrumental numbers such as “Flusso and “Quintet” also break new ground for the band. It is on these tracks that Curfman demonstrates his knowledge of music history and culture as he brings us experimental compositions similar to that of the legendary German composer, Kurt Weill.

One of drawbacks to this album is mixing of Curfman’s vocals, which at times are so drenched in echo they are often difficult to understand. However, for the most part the music is so compelling that it’s excusable.

As with most long albums there is some fat that could be cut, but considering its denseness, Attend offers a plethora of experimental post-punk songs that will keep you listening.

As a child growing up in the suburbs, Ryan found music as a way to soothe his boredom. After first hearing AC/DC at the age of 10, he was hooked on music. Tracing its roots to the ‘50s, he became obsessed with Elvis, Buddy Holly and Chuck Berry. Somehow that led to grunge, then psych-rock, then jazz, etc. The list goes on and on and his collection of vinyl records continues to grow.
RELATED ARTICLES
album reviews
9.0