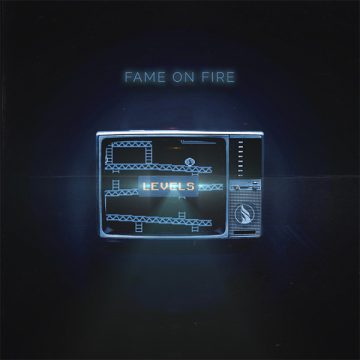 Fame On Fire has consistently tested the genre waters with each project release they have set their minds to, showing the world they are more than your typical multi-genre band. So far, they have succeeded in outdoing everyone’s expectations since the debut of their EP Transitions back in 2017.

By effortlessly pushing the boundaries of rock, hip hop, and other heavy musical elements to generate the sound that is Fame On Fire, the band has also done this by also being organic, regardless of what the world thinks about this record or the next. Now Fame On Fire has come to light 2020 ablaze with their latest self-produced release LEVELS via Hopeless Records.

From the gate, we get a beautifully heavy one-minute intro “Cover Band” that escalates into one of the diamond hits on the album “Her Eyes”. Pythonic guitar riffs intermingle with punchy drum work and melodic and unclean vocals, making this one of the best-crafted tracks on LEVELS.

Another atmospherically, gorgeously done juncture that stands out on this record is “HEADSPACE” Lyrically, it is one of the most profound and immensely moving tracks on the album. Instrumentally, it’s impressive with its cyclopean guitar riffs, robust percussive presence, and pretty ethereal elements that make this track so incredible to experience.

Progressive moment “Now and Forever” shows this band at it’s best as it shows Fame On Fire’s ingenious writing talents to create memorable lyrics and arena-ready instrumentals that are captivating and will stay with you long after.

Last but not least, is the final track on LEVELS, “Scars of Love.” Its denuded presence is a welcomed addition to the record, as it’s such an alien interaction compared to what we have come to experience so far. Still keeping a lot of the atmospheric touches we have had in many of the other songs, a lot the heaviness is dialed down, making this a satisfactory ending to a well-done first album.

There are many songs on LEVELS that deserve so much praise on this album, it’s a poignant collection of tracks that journey through themes of anguish, loss, and toxicity, combined with the best aspects of rock, hip hop, heavy music, and other ethereal elements that shows the band’s maturity and readiness to play with various genre territories to craft musical moments people will love and remember. If the band continues to deliver S-class hits like this in the future, the sky is the limit for Fame On Fire.