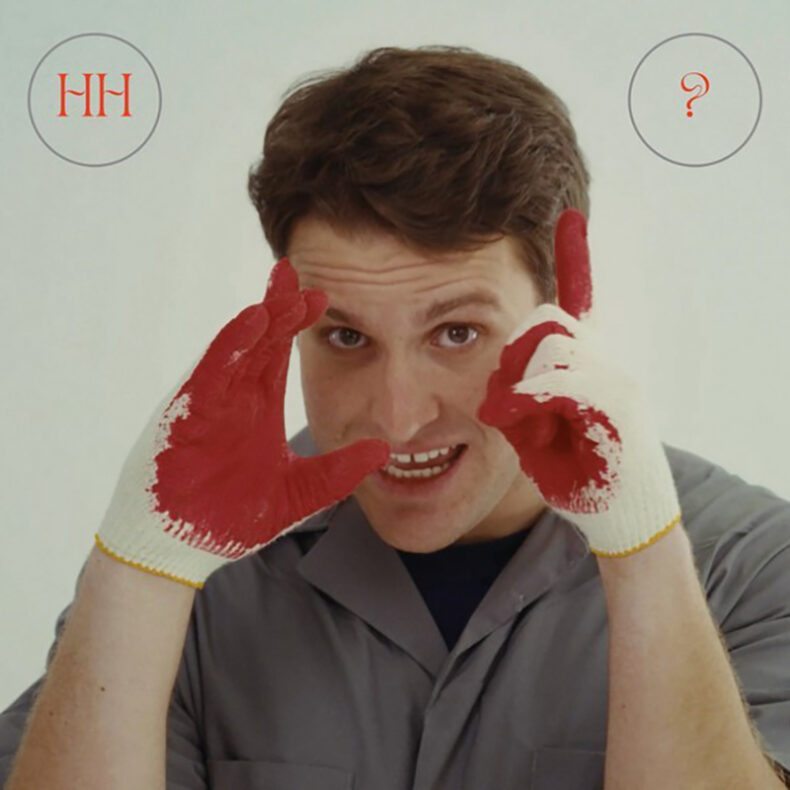 HENRY HALL ANNOUNCES FORTHCOMING EP ARE YOU KIDDING ME????? OUT SEPTEMBER 30 | SHARES NEW SINGLE “AM I IN THE PHOTO?”

Henry Hall, known for his “sickly sweet voice” and “wacky imagery’ announces his forthcoming EP Are You Kidding Me????? out September 30th. Along with the announcement, he shares his single and video for “Am I In The Photo?”. Reminiscent of Father John” Misty’s witty lyricism and Dent May’s pop filled theatrics, Henry Hall, commands your attention with his crafty yet relatable songwriting.

Henry on “Am I In The Photo?” –  One day I was just messing around in my favorite weird tuning on my guitar and I came up with this double time groove and chord progression that was nice and driving and thuddy. I really liked it. Simple, two chords, back and forth. I usually start writing a song with the chords and beat first like that. I know that I really like what I come up with if I start singing loudly along with it. That usually means that I sing high or in falsetto because it’s more fun to sing loudly in a higher register for me. That’s what happened with this tune and how the hook of “Am I in the Photo?” was born.

There’s nothing worse than not being included in a group photo and there’s REALLY nothing worse than being unsure if the person you love loves you back, so I wanted to write a song about those two things put together. This is a paranoid song and I hope it gets stuck in your head like it did in mine, just like when you’re experiencing real paranoia. It’s all in your head and you are in the photo! Maybe?

attack and then help you laugh it all off once it’s over? Well, that’s what Los Angeles- based artist Henry Hall’s music does. It is one-of-a-kind alternative pop. Featuring his captivating falsetto paired with his witty, idiosyncratic lyrics, Hall’s music is self-deprecating and soulful, as if The Smiths met Prince. Underneath Hall’s tongue-in-cheek language and moving melodies are alluring guitar and synthesizer textures, which compliment his infectious vocal harmonies in a way that evokes Grizzly Bear and Jeff Tweedy.

After graduating from Wesleyan University in 2014, Hall moved to New York City to play live shows and craft My Friends Don’t Like Me, his 2016 EP release. The project garnered attention online and eventually landed a placement on the Judd Apatow-produced Netflix series, Love. His subsequent single, “Talk,” broke 1 million streams on Spotify in 2018 and soundtracked a Casey Neistat YouTube video that has over 10 million views. His next 2019 EP, Questions, Comments, Concerns, has a song featured on the final season of HBO’s Veep. “Henry’s new EP, titled Questions, Comments, Concerns, is an aural explanation of his anxiety and its contradictions,” says Paper Magazine in their feature on the aforementioned EP. “It is an event that you, for once, do not want to miss.” Hall’s 2020 debut full-length album, Neato, is movingly melancholic and anxious like our current reality, yet still hilariously ironic and impressive musically in Hall’s signature style. It is the best demonstration of his disturbingly witty and captivating brand of indie rock to date. Its release garnered impressive playlist placement on Apple Music including the New Music Daily playlist and a feature on the Alternative Genre homepage. And, in January 2020, Hall caught a huge break — he made his television debut on The Tonight Show Starring Jimmy Fallon. Performing “Alive, Annoyed,” the 10th track off of Neato, Hall showcased the crystallization of his unique vocal style and range, witty lyrics, and masterful guitar playing.

Hall’s upcoming EP Are You Kidding Me????? is the best crystallization of his one-of-a- kind alternative pop style yet. The EP is funny, catchy, rocking, and soulful all at once. Each song’s title and story is framed as a question, giving the listener insight into Hall’s somewhat-neurotic uncertainty, which is nothing if not highly relatable. Look for Hall on the road in late 2022 and for more new music to come very soon

SPILL NEW MUSIC strives to keep our readers up-to-date with new releases by your favourite artists, keeping you informed of new album, single, and video releases. Stay tuned -- who knows, you might just discover your new favourite band.
RELATED ARTICLES
are you kidding me?????henry halljulia louis-dreyfus

SPILL NEW MUSIC: HENRY HALL SHARES NEW SINGLE “DO I LOVE YOU?” | FORTHCOMING EP ‘ARE YOU KIDDING ME?????’ OUT SEPTEMBER 30