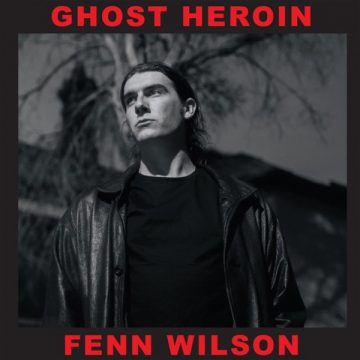 Ghost Heroin is Fenn Wilson’s debut album, following on the heels of 2015’s EP, Tales Of The Black Dog. Produced by acclaimed blues guitarist Shannon Bourne, Wilson has created a deeply personal and unique album. This is a sparse rock and folk album with some leaning towards the blues.

Wilson has a very distinct and expressive voice, with which he delivers some very strong lyrics. “Eye On You” features lines like “Nothing brings the rain like fake smiles”, which may seem simple, but say a great deal. The song has a sparse, bluesy feel, and features a great choir at the end. It could have easily been overproduced, but Wilson and Bourne wisely went with a pared-down sound, one that gives the listener that uneasy feeling.

There are many highlights, but “River” seems to be the cental point of the record. Lyrically and musically, this track seems to ground the album. The strum of an electric guitar, with the minimal arrangement supplemented with beautiful cello, sums up the feel of the album in a little over six minutes. Wilson sounds older than his years, like he has lived through more than the average young man his age.

Ghost Heroin is a very encouraging debut album. Wilson has a lot to say and very creative ways to say it. This Melbourne-based musician needs to expand beyond the Australian border as he has a great deal to offer, and, I expect, much more to say.

Born and raised in Whitby, Aaron discovered music through his love of The Beatles. This led to a career in radio, writing for various publications, and ultimately a radio show about The Beatles (Beatles Universe), which ran for over four years. When not immersed in music, Aaron enjoys spending time with the loves of his life -- his wife Andrea, and daughters Emily and Linda (all of whom have an intense love of music too).
RELATED ARTICLES
album reviewalbum reviewseye on you
8.0