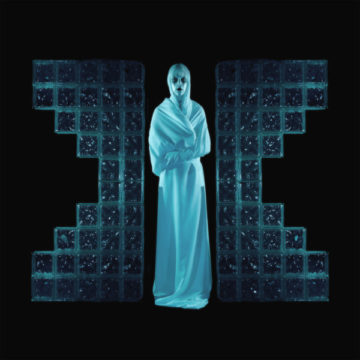 Deb Demure’s powerful voice, the beat of hypnotic synthpop, layers of cosmic energy, and lyrics that can be read as contemporary magic spells: this is Drab Majesty. I became aware of Drab Majesty thanks to Psychic TV. Drab Majesty came to Toronto a month later to open for the mesmerizing King Dude. The show was intimate and a good reminder about why we should always support opening bands; I hadn’t been moved in such a way in years. Immediately after that enlightening experience, I purchased Careless, one of my most treasured and pinkest vinyl in my collection. This past January, I had the opportunity of experiencing Drab Majesty again, this time supporting Cold Cave at Toronto’s Lee’s Palace, Mona D now accompanying Deb Demure and Apollo (the bust that joins Drab Majesty on stage).

The album starts with “Induction”, an instrumental that hints at the fact that we are going to be taken on a journey through a mystical neon highway with fluorescent lit skies. After the initial calm, “Dot In The Sky” follows, a song that I picture myself dancing under the rain to, as well as in a dimly lit club with half a tallboy in hand. “39 By Design” is a time traveler; the type of song that could have been written 20 years ago, or 20 years from now, and it would suit both time periods. “Not Just A Name” could be described as a shoegaze epic that echoes through the chamber of one’s heart.

The arrangements are so careful and lush on The Demonstration, however the essence of the lo-fi origins of Drab Majesty can still be perceived, and the instrumental and dream-like “Hath No Form” is a clear example of that. “Too Soon To Tell” is a future new wave classic; I can easily imagine hundreds of adoring followers singing along with Deb Demure. “Cold Souls” is one of my favourites on this album. It begins as a lullaby, setting the mood for a trance-like state, only to build up, which is a perfect example of how captivating this record is. “A Spire Points At The Heavens” is delightfully noisy, with many layers of sound that contain something primary and raw, all in a handful of seconds. “Kissing The Ground” is a song that I cannot help but move to, and, like most songs on the album, it is the deep voice of Deb Demure that injects new life and purity into the rhythm. “Forget Tomorrow” is an intense song; it feels as if it walked out of a dream to be part of this reality. “Behind The Wall” makes me think of all the B-sides I have loved throughout my life and why, to this day, flipping the record and getting to the last song makes my heart speed, this is the jewel of the crown that rests on the head of Drab Majesty.

There are four remixes worth mentioning: “Too Soon To Tell” by Cold Cave, “Forget Tomorrow” by Drew McDowall, “39 By Design” by Martial Canterel, and “Kissing The

Ground” by Silent Servant. Every remix is beautifully produced and very different from each other, they honour the originals, and at the same time, make them enter other dimensions. “Too Soon To Tell” becomes a dance tune, “Forget Tomorrow” gains a darker meaning, “39 by Design” metamorphoses into minimal wave, and “Kissing the Ground” becomes a must for any DJ to enhance a dancing crowd. In conclusion, The Demonstration is a phenomenal record by exceptional performers and quite the proper introduction to Drab Majesty for the uninitiated ones.