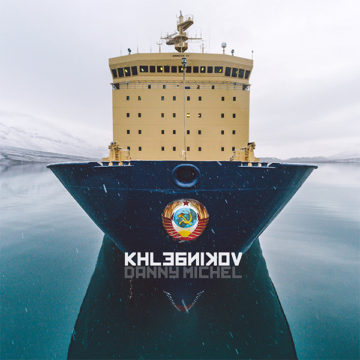 Danny Michel has always been an avid storyteller in his music. From painting bleak images of displaced animals in an increasingly urbanized world on “Feather, Fur, and Fin”, to the sombre tale of a mundane rainy day on “Elgin Avenue”, Michel’s ability to convey a rich scene to his audience is evident on his latest release, Khlebnikov. During the summer of 2016, Michel was invited to join an expedition with Canadian astronaut Col. Chris Hadfield on his Generator Arctic Project, alongside various scientists and artists with the vision of documenting the breathtaking journey. The album was written and recorded during his 18-day stay aboard the Russian Ice-Breaker, Kaptin Khlebnikov, in a makeshift studio in his tiny cabin, creating an authentic ambience of life at sea. Michel later polished the tracks with brass and string arrangements in collaboration with band mate Rob Carli, award-winning Canadian composer and long-time friend of Michel’s.

Throughout the album, we hear unique sounds captured during the expedition inspired by Michel’s surroundings. In addition to vocals from the ship’s dishwasher, as well as Hadfield, who is fluent in Russian, Khlebnikov features sled dogs from a Greenland outpost, a pod of whales, the ship’s engines, the clanking of doors, horns, and the cracking of icebergs, all of which portray the austere conditions of the Arctic Ocean. The first track, “Inlet”, sets the tone with the crash of ocean waves supplementing melancholy strings. “Qilakitsoq”, the most atmospheric song on the album, captures the vastness of the ocean through wistful echoes and airy soundscapes. Like a wave, the lyrical content maintains highs and lows. Commenting on his journey and all that he experiences, Michel’s work on Khlebnikov is a testament to the fragility of our precious earth and the magnificence of its wildlife, similar to Great Lake Swimmer’s venture into the Great Bear Rainforest of Northern B.C., in which lead vocalist Tony Dekker expresses the breathtaking scenery through his music.

As an adventurous individual and experimental musician, Michel’s experience aboard the ship translates hope to listeners, ultimately signifying the beauty and wonder of the ocean. Michel further cements a prominent place in folk music as one of Canada’s finest singer-songwriters, with the innate ability to share stories with messages rooted in environmentalism. He continues to showcase his talents in new and exciting ways, pleasantly surprising his listeners.

Emily is a sociology student at McMaster University with a passion for social change, focused on issues surrounding gender equality and societal mental health. She believes that music, whether going to concerts or listening alone, is the best way for people to feel connected. After abandoning her small-town roots for opportunities in Toronto, she intends to merge her two loves of writing and music in the hopes of satiating her wayward soul. Follow her on Twitter at @emmniic18.
RELATED ARTICLES
24000 horsesalbum reviewsdanny michel
8.0