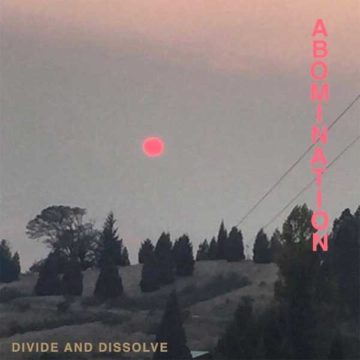 Like coffee and cigarettes, music and politics are just made for each other. Inherently, all music carries with it a socio-political value, and Texan-Australian duo Divide and Dissolve throws this front and center in their experimental music making. Their desire to dismantle all pillars of racism and sexism is not a polite request but a forceful coup d’état, beginning with their ear-splitting debut album BASIC and continuing onto their latest heavy installment, Abomination.

Abomination is an eight-track sludge through an intensely-thick wall of doom, played through Takiaya Reed on saxophone and guitar and Sylvie Nehill on drums. Their intent poses a serious challenge to the listener as to the power wielded by those who play music. While music in its primordial infiltrates every country, culture and class, genres like heavy metal seem to remain an exclusive realm of white masculinity. For Reed and Nehill, performing as women, and women of colour, in a genre where colour and femininity are a minority, is liberating and representative of power against the status quo.

The most striking element about Abomination is its lack of words. Protest music has always relied on the strength of lyrics to ‘fight the power.’ But with tracks entitled “Cultural Extermination” and “Indigenous Sovereignty,” Divide and Dissolve’s message is wholly reliant on the energy and solidarity of their dissonant cymbal crashes and warped drones. “Reversal” features the only words on the album, spoken defiantly through the poetry of writer Minori Sanchiz-Fung, in a reflection on language and its role in both freedom and oppression. The lack of lyrics, however, is purposeful. With the absence of vocals sung, the listener becomes fixated on the physical elements of the music: the low and slow vibrations of their destructive sound. Divide and Dissolve demands and commands your attention, and successfully provides a bone-crushing soundtrack to social change.

Michelle La is a freelance writer based in Melbourne, Australia. She is the Editor of Cat Brain Land, a music blog that loves new and alternative music from Asia and Australia.
RELATED ARTICLES
album reviews
8.0