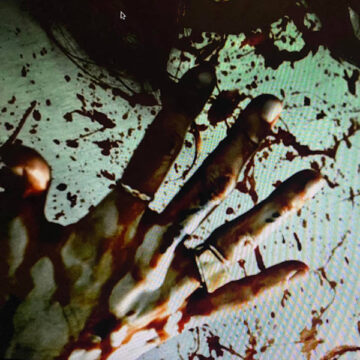 Dead Cosmetics have released their first ever, full-length album, Was Tust Du. The independent, ON-based supergroup consists of members Daniel Allen (Indian Handcrafts, Grale, Colonizor), Sarah Hull (The Rip Nancies, DuoTang), Brit Lobsinger (The Rip Nancies), and Sean Alten (Bob Heath & The Staggering Drunks). Following the release of singles “Necktie”, “Ghost Words”, and “Robots On The Inside”, all released within the last month, Was Tust Du is a hauntingly cinematic listening experience.

Opening with the thematic, sample heavy opener, “Best Face Forward”, Dead Cosmetics create an ambient and unsettling soundscape to act as a prelude for the record before opening with the gritty bass riff of “Sideways”. The first real song on the record, “Sideways” is a harrowing song that sounds as if it could be an unreleased Trent Reznor demo from The Downward Spiral session. Setting the tone for Was Tust Du, “Sideways” makes way for “Robots On The Inside”, a haunting song that creates a twisted atmosphere through its backing vocals.

Without glossy production, the use of riffs, or all the much melody, Was Tust Du feels like a sonic experiment with the goal of exploring a musical path less travelled. With hints of new wave heard through the slightly crooned, baritone vocals, paired with some of the darkest material I’ve heard in some time, Dead Cosmetics have created a unique fusion of music that wants to be pop, but, at the same time, refuses to be anything remotely commercial.  Of the ten tracks, the Bowie-inspired “Limbless”, the acoustic droning – and almost meditative – “They’ll Leave You Out”, and the electronic driven closer “Ghost Words” stand as a cut above the rest.

All in all, Was Tust Du is a grimy record that makes for a creative debut from Dead Cosmetics. Intentionally inaccessible, Was Tust Du is purposely abrasive and delivers a truly alternative musical experience.