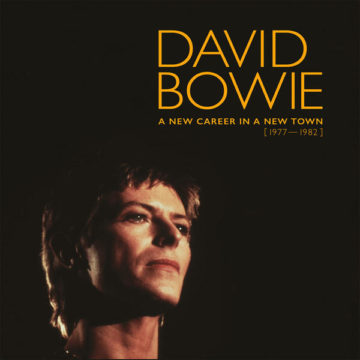 David Bowie was to the 1970s what Elvis was to the ‘50s and the Beatles were to the ‘60s. He was the most dominant and experimental force in possibly the most musically diverse decade in pop. The ‘70s saw him begin as a folk singer who quickly adopted the Ziggy Stardust persona during his glam-rock phase; then morphing into the Thin White Duke for a short soul period halfway through the decade. Becoming a sensation for the various characters he created as much as his music, in the late ‘70s he decided to ditch the role playing and took on a new persona: himself. It was perhaps the most daring move in his career.

The third David Bowie boxed-set released by Parlophone, A New Career in a New Town (1977-1982), perhaps represents the late singer at his best. His iconic Berlin period, produced by Tony Visconti, finds Bowie experimenting with the ambient-pioneer Brian Eno and ex-King Crimson guitarist Robert Fripp. Accompanied as well by his backing band on Station to Station, together they made the “Berlin trilogy”: Low, “Heroes”, and Lodger. Along with the 1980 album, Scary Monsters (And Super Creeps) which is left out of the so-called trilogy, all dabble in ambient, electronic music heavily influenced by German Krautrock bands like Neu! and Kraftwerk. It was not the first leap of faith Bowie had taken, but as time has passed it has become his most prolific era amongst his hardcore fans.

During his Berlin period, Bowie essentially created new wave, post-punk, and industrial rock by borrowing from the Krautrock artists of the day. Of course, the influence of Eno is a major contributing factor his sound. Who else could have helped create such stark soundscapes heard on “Warszawa” and “V-2 Schneider”? Robert Fripp’s contributions should not be overlooked either. His dense layered guitar is what helps create the wall-of-sound effect in “’Heroes’” and his spastic soloing is enough to send you into a temporary shock on “Teenage Wildlife”. Without these records Joy Division, Gary Numan and Trent Reznor may have never found their sound.

The boxed-set features more than just the typical humdrum aspects of your average reissue (of course it would, it’s Bowie). Along with his studio album releases between 1977-80, the set includes the incredibly cool “Heroes” – EP, which is made up of the single cut, the long mix, as well as a version in French and, of course, one in German. Stage (2017) which is an essentially a more melodic, reworked version of the original live album. Its reorganized track listing is more sonically pleasing that the original.

The final juicy tidbit from A New Career in a New Town, is Re:Call 3 which is particularly fetching for its inclusion of Bowie collaborations “Under Pressure” (with Queen) and “Peace on Earth/Little Drummer Boy” (with Bing Crosby). Oh, and in case you’ve never heard Bowie’s obscure EP Baal, it is included on the latter half of Re:Call 3, and it is brilliant.

And of course, there’s the original material to boast about too. Any collection that has Low, “Heroes” and Scary Monsters in it is enough to consider paying $250 for.

As a child growing up in the suburbs, Ryan found music as a way to soothe his boredom. After first hearing AC/DC at the age of 10, he was hooked on music. Tracing its roots to the ‘50s, he became obsessed with Elvis, Buddy Holly and Chuck Berry. Somehow that led to grunge, then psych-rock, then jazz, etc. The list goes on and on and his collection of vinyl records continues to grow.
RELATED ARTICLES
album reviewsdavid bowieparlophone
8.0