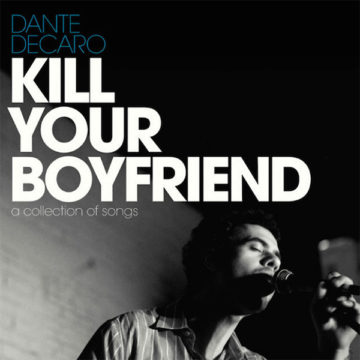 Dante Decaro has a longstanding relationship with the Western Canadian Music Scene. He is a founding member of Hot Hot Heat, is the lead singer of Johnny and The Moon, and most recently revived his role with the reunited Wolf Parade. Despite a flustered 2016 touring with Wolf Parade and preparing for the band’s May album release, Decaro strung together time to create his first ever solo EP. The six-song album is the definitive “short but sweet” of the music world, packing all the punch in half the tracks.

The album single, “Love Like Thieves”, grips listeners with the haunting contrast of deep acoustic guitar and soft melodic flute. Unexpected instrumentals prove to be a common theme in the album, where Decaro utilizes the sounds of everything from bells to maracas. “Rwanda” is a particularly stark track with a heavyset ‘80s vibe, reminiscent of the soundtracks to your very first Atari games. The effects of the consistent percussion and synthesizer come in strong on the front end, but it is the xylophone riffs that offer up a video game-twinged bounce, meant only to initiate the start of a big adventure.

The hallmark of Kill Your Boyfriend is the distinctness of each song as they build on each other, without even a hint of repetition. Spanning the musical time line, Decaro brings the listener through the decades with retro influences of the ‘60s and ‘70s, vibrancy of the electropop era, and a blend of the brooding sounds of the ‘90s with the emo and punk notorious of the early 2000s. Of course, it all comes together brilliantly with Dante Decaro’s controlled indie vocals that target all the emotion that the listener has on offer!

Emily Rubin is a lifestyle writer who focuses most of her efforts in the fashion & digital marketing spaces. She forayed her modern version of pen to paper time into the world of Spill Magazine to uncover new music aside from the “Discover” playlist on Spotify. With an eclectic musical palette, Emily reviews a wide host of tunes for Spill, but her concert coverage exclusively explores the scene of her native Montreal.
RELATED ARTICLES
album reviewsdante decarohot hot heat
8.0