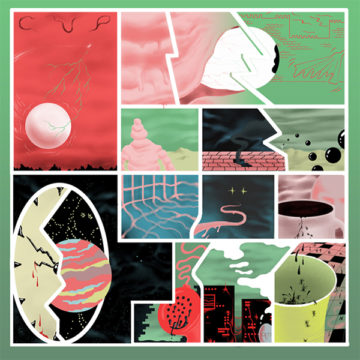 Cup is Tym Wojcki, based in Brooklyn.  Jitter Visions is the eighth studio release under the name Cup, and this album is not for the weak of heart. This is a full on audio assault on the senses,  and it is quite good.

Wojcki has a clear sound picture of what he wants to achieve. The album is very uniform and well put together. The songs are short bursts of energy and the listener can barely catch their breath before Wojcki is off on another song. One does need to like every tune, because another is coming on the heels of the last.

To be clear, this is not retro punk. This is something entirely different. There are many different genres rolled up to make Cup’s distinct and unique sound. There is a ‘punk’ element, but there is also psychedelic, rock, prog rock, and all points in between. The bottom line is that this is guitar based rock, with very visual lyrics and an unapologetic aggression. Wojcki’s origins are as a drummer and he plays the guitar as if it were a drum. The drums are there too, but the guitar work is so brilliant that it takes centre stage.

Although the album does have a consistent sound, the music is very diverse and quite honestly one is never sure where he is going with the songs. Listen to “It’s Calling For You”, which is an atmospheric, melodic piece that leads into the concluding and noisy  “Wide Eyed In Jitter Visions”.  It should not work, but it does.

Jitter Visions is a solid, loud, rocking album. There is a lot going on and it may take a few spins before the listener is comfortable with what they hear. Of course fans will enjoy it and will notice that Wojcki continues to progress and grow as an artist. since his last album and over his career. Jitter Visions is full of sounds bent and shaped to form songs. Also some great fuzz guitar and bass being played throughout. It is a great album.

Born and raised in Whitby, Aaron discovered music through his love of The Beatles. This led to a career in radio, writing for various publications, and ultimately a radio show about The Beatles (Beatles Universe), which ran for over four years. When not immersed in music, Aaron enjoys spending time with the loves of his life -- his wife Andrea, and daughters Emily and Linda (all of whom have an intense love of music too).
RELATED ARTICLES
aagoo recordsalbum reviews

by SPILL NEW MUSIC on November 15, 2018
TY SEGALL – FANNY A SPILL EXCLUSIVE EP PREMIERE Tomorrow iconic and much revered noisemaker Ty Segall is releasing his latest offering, dedicated to and named after his own dog. The ‘Fanny’ [...]