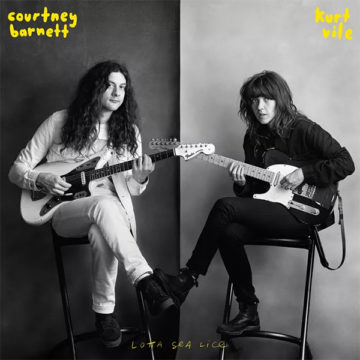 A collaboration that looks good on paper, that sounds even better on record,Kurt Vile and Courtney Barnett have released some of the most intelligent, influential and stunning albums this decade, and together they bring the best of both of their worlds into one record.

Lotta Sea Lice was recorded in eight days over a fifteen month span. It was important for both of the artists to be together in the same studio, so when their schedules allowed it, they were in the same place at the same. Nothing emailed to each other and assembled through a mixing desk. Vile and Barnett were together with their back-up band recording in the same studio. When you listen to the album, it is clear that they are together and playing off each other.

Courtney Barnett has released only one previous album, 2015’s Sometimes I Sit and Think and Sometimes I Just Sit, a brilliant and extremely successful album. Vile, however, has been around for a longer time, he was with War on Drugs in the early 2000s, has been solo since 2008, and has released six solo albums.

Supporting Barnett and Vile are fellow Australians Mick Turner and Jim White (The Dirty Three), Stella Mozgawa (Warpaint) and one other Australian, Mick Harvey (Nick Cave). But it is Vile and Barnett that bring everything together with their playing and incredible singing.

The album sounds like two old friends hanging out in a studio and using the structure of songs to talk. The music ranges from folk, to alt-folk, to straight ahead rock. The guitar playing, especially on the first single “Over Everything”, is some of the finest I have heard this year. Both play off each other and here they  communicate with solos rather than words.

As good friends do, each one covers the other’s song. Vile takes his turn at Barnett’s “Out of The Woodwork”, while Barnett does an astounding cover version of Vile’s “Peepin’ Tomboy”. Both of their interpretations are original and they leave their own distinct stamp on the songs.

Everything works on this album — strong lyrics, strong performance,s and songs that burrow into the listener’s psyche. As you listen to this conversation between friends, you want to hear more and find out what happens. It is like sitting at a party and two friends are talking, but recounting a story for all to hear. In this case the stories are interesting, emotional and stirring.

Collaborations do not always work, but in this case it does. Lotta Sea Lice is a brilliant album. These two might want to consider more work together. They are touring with the release of the album, but one can only hope this is the beginning of a long musical relationship.

Born and raised in Whitby, Aaron discovered music through his love of The Beatles. This led to a career in radio, writing for various publications, and ultimately a radio show about The Beatles (Beatles Universe), which ran for over four years. When not immersed in music, Aaron enjoys spending time with the loves of his life -- his wife Andrea, and daughters Emily and Linda (all of whom have an intense love of music too).
RELATED ARTICLES
album reviewscourtney barnettkurt vile
9.0