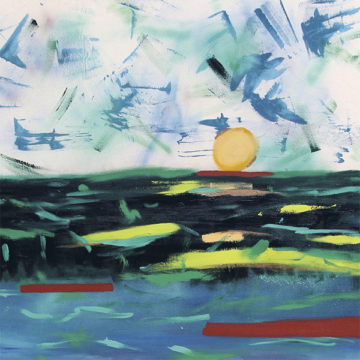 The Kents
Within Waves
Independent

On October 13, 2017, The Kents released their sophomore EP, Within Waves, a year after the release of Waking. Hailing from Lindsay, Ontario, The Kents composed an EP drawn from the experience of exploring Canadian landscapes, interpreting the existential growing pains of young individuals, and the ultimate impact this time has had on the band. Traveling through northern and eastern parts of Canada, the lyrical inspiration fulfills the band’s prescribed “anthemic intimate” description. Within Waves is a demonstration of substantial growth for The Kents. Veering slightly away from their comparison to the Arkells, The Kents are distinguishing and building their own voice with the release of this EP.

The most popular track, “From the Start,” introduces the album on a slow tempo with a vibey chorus that eventually leads into a faster-paced song. The lyrical poetry is one to admire on this track. This song was crafted with the intentions of telling a story that compares the act of drifting through water to the feeling of losing yourself and your purpose — specifically in your creative pursuit — one the band openly faced. Later in the song, a longing to get back to where they were “from the start” is shown with the building of intensity where each instrument keeps a dramatic progression while the vocals fade into an atmospheric element.

Proceeding, “Caroline (I Can’t Explain)” exists as a familiar and trademark sound for The Kents. As this upbeat and drum-heavy performance plays out, listening to the lyrics on this track also takes you through grief and how it feels to be at a loss for words.

Further on, “Is There Anyone?” and “Distant” are two great testimonies to the lead singer Warren Frank’s vocal abilities. The outro of “Distant” plays out beautifully with a slow strum and the sustaining guitar tone that is accompanied by his operatic and angelic vocals. The final seconds of this song conclude with sonic elements warping out, creating an incredible and beautiful transition to the next song, “Low Light.” This transition was seamless. The vocals in “Low Light” are strong, complemented by slower-paced drums and a moody guitar melody.

The Spill Magazine is a Toronto-based online publication dedicated to covering the independent music scene with a strong focus on our thriving hometown talent. Our writers bring you up-to-date news, in-depth features on musicians and reviews for the latest CD releases. We also travel to the front lines for all local festivals including Canadian Music Week and North by Northeast. Don’t forget to check out our Facebook and Twitter pages for all daily Spill updates.
RELATED ARTICLES
album reviewsthe kentswaking
8.0