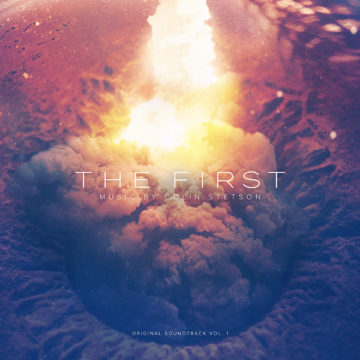 Colin Stetson’s trademark whale-sound bass saxophone swells have screamed ‘movie soundtrack’ ever since he first started releasing music under his own name over a decade ago. Though he is perhaps best known for his instrumental contributions to artists like Bon Iver and Arcade Fire, his compositions have recently been creeping their way onto film and television screens. It started with synchronizations of existing Colin Stetson movements and has recently expanded into entire entire soundtracks for the silver screen included the blistering score for the horror Hereditary, and now a score for the sci-fi serial The First.

The circular breathing technique that permits the pulsing and fluttering saxophone and carries his live performances is a seemingly endless pool of creative alacrity, but for The First he uses it conservatively, just enough to make it clear that it’s a Colin Stetson composition without returning too often to the same tonal framework.

There is a whole host of instrumental ideas in place here, anchored by the other-worldly break-up pattern of the bass saxophone. Dusty piano beautifully anchors several of the movements, skillfully elaborated on by shimmering synths, strings, and of course, horns, filling out the soundscape on movements like ‘Memory and Amibiton.’ The tense moments are the most profound, with scratchy tones and pounding percussion that billow out into dramatic breakdowns on movements like ‘Relapse.’ It’s an epic score to say nothing of the show, the first, let’s hope, of many. This is easily enough Colin Stetson to send you to Mars and back.

As a music industry professional, Liam has seen all sides of the industry. Working as a venue and operations manager for the Calgary Folk Music Festival, specifically their stunning black box concert hall Festival Hall, he has put on countless concerts and music events. In the evenings you'll find him writing bios and copy for artists as well as shooting promotional and live still photos for bands and presenters. You might even see him brewing up his own introspective and self conscious anti-folk in Calgary's DIY music seen as well. His palpable musical network and knowledge of every facet of live music production make him an invaluable resource. He is currently at the Canada's Music Incubator Artist Manager Program in Toronto. (Photo Credit: Michael Grondin Photography)
RELATED ARTICLES
album reviewalbum reviewscolin stetson
8.0