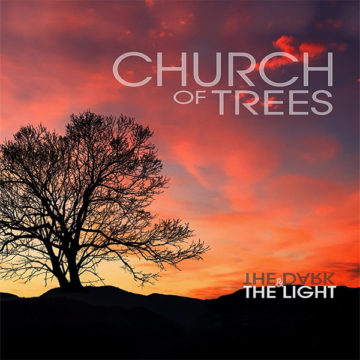 Church Of Trees
The Dark And The Light
Independent

Church Of Trees is more of a concept and project than it is a traditional band. The brainchild of the remarkably talent writer, musician and producer Bernard Frazer. The Dark and The Light is their second release following the release in 2017 of the  EP Primitive Creatures. At that time Church Of Trees was a duo consisting of Frazer and vocalist Felicity DeCarle.

For this album, Frazer has chosen to go with many different vocalists, which turned out to be a brilliant choice. Nothing against DeCarle, but here the song dictates the vocalist and Frazer has discovered some very strong Canadian vocalists.

The album kicks off with the single “Like Gary Numan”, which features DeeDee Butters. A brilliant song that brings to mind the 1980s without being a copy of that style. Frazer works in synth parts that hints at Numan, but this is not a tribute to hat artist, but rather an opportunity to to write a strong socio-political song. A great melody and stunning lyrics equal one brilliant song. And that is just the beginning.

One of the stars of the show is Tara Holloway who provides the strong vocals for “Scream In Silence”. Holloway’s vocals set against Frazer’s synth and programming produces a soul electronica hybrid and it absolutely works. It is also a very strong political rally against Trump. Fraser works all of that in one song. “I can only breathe in cold defiance” sings Holloway.

This is what makes this album so strong, is the diversity of styles throughout. As it plays it is impossible to predict what comes next. But one thing is certain, the album is strong and there is not a weak track among the collection.

All of the vocalists deserve special mention. Along with Holloway and Butters, Kate Schroder, Jill Beaulieu, Krista Hartman, and Andrea Matchett all turn in stellar performances. Rob Preuss (The Spoons, Honeymoon Suite) makes an appearance and adds some tasteful keyboard playing and some excellent remixes, “Scream In Silence” being my favourite.

But the captain of this electronic ship is Bernard Frazer who brings it all together. His production is flawless and he has an ear for not only a strong melody, but his own unique melodies. He has developed his own distinct style that takes something very melodic and then he throws a curve ball at the listener (“Me, Myself and I” is a good example). He writes clever, thoughtful lyrics and has come up with a solid, strong, consistent album. Frazer is also able to bring together a number of artists and on each song they become Church Of Trees. A remarkable accomplishment.

The Dark And The Light is the perfect soundtrack for those who want to dance and think at the same time. The music is strong but do not overlook the lyrics and the wonderful nuances throughout. The more one listens to this album, the more one will experience. Church Of Trees has one more new convert.

Born and raised in Whitby, Aaron discovered music through his love of The Beatles. This led to a career in radio, writing for various publications, and ultimately a radio show about The Beatles (Beatles Universe), which ran for over four years. When not immersed in music, Aaron enjoys spending time with the loves of his life -- his wife Andrea, and daughters Emily and Linda (all of whom have an intense love of music too).
RELATED ARTICLES
album reviewalbum reviewsbernard frazer
8.0