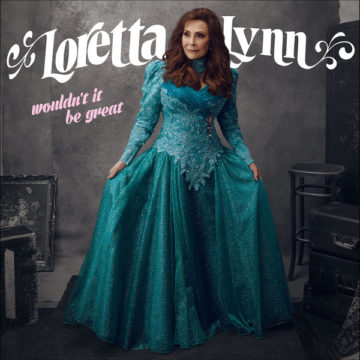 If country is the storyteller of music genres, Loretta Lynn has always been one of its most captivating memoirists. Lynn continues weaving her personal narrative on Wouldn’t It Be Great, her 41st album and the third of five to be recorded at the renowned Cash Cabin Studio in Tennessee. This compilation features fresh takes of previously recorded songs, including the title track and “Darkest Days,” along with such new material as “The Big Man.”

Revisited classics like “Coalminer’s Daughter” shore up Lynn’s image as a scrappy bootstrapper, but plenty of songs see her getting vulnerable about faith and family. God, Mama, and a man who can’t set the bottle down may comprise much of her subject matter, but Lynn knows how to have fun too. “Ruby’s Stool,” a new track with a twinkling piano-bar feel, gives us a lighter-weight but more mischievous dose of her heyday sassiness from songs like “Fist City” and “You Ain’t Woman Enough (To Take My Man).”

While the vocals on this version of her first number-one hit, “Don’t Come Home A-Drinkin’,” aren’t as fluid as those from the 1967 cut, she still amply demonstrates how strong (“These Ole Blues”) and delicate (“Ain’t No Time to Go”) her voice can be.

Though Wouldn’t It Be Nice takes few risks and doesn’t have the cohesive character of 2016’s widely acclaimed Full Circle, fans will welcome the album as a reminder of Loretta Lynn’s talent, grit, and country-mile-wide heart.

Merry Mercurial blogs about all things music on her website, The Music According to Merry. She also reviews for Modern Rock Review and writes features for Cover Me. Her fiction has appeared in Stockholm Review of Literature, Front Porch Review, and Crack the Spine, among other publications. She lives in North Carolina with her daughter.
RELATED ARTICLES
album reviewalbum reviewssony music
8.0