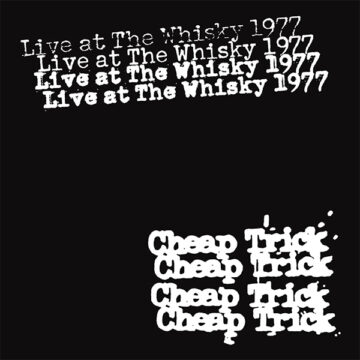 Cheap Trick was not an overnight success. The band  formed as Cheap Trick, in 1973 after having been together in one configuration or another since 1967. In 1975 Robin Zander joined the band after their original lead singer left the band. In 1976 they finally signed a record deal with Epic records and in 1977 they released their debut album, Cheap Trick. That album is now considered a classic, but at the time the album failed to even make the top 200 album chart. When they went to Los Angeles to record their second album, In Color, in 1977, it was decided that while they recorded they should continue to work to perfect their sound. They were booked into five nights at the legendary club The Whisky A Go-Go on Sunset Strip. Four of the five shows were recorded, and that is where Live At The Whisky 1977 comes in.

Some of the material has been previously released on the album Out To Get You!: Live 1977 (2020), but this four-disc set is all four of the concerts recorded during their stay at The Whisky. What is interesting, when listening to their live performances, is how much they would change in about two years when Live At Budokan is released. Here at The Whisky, they are closer to punk than straight ahead rock and roll/pop and in about two years Cheap Trick developed into a much more polished act. This is not a criticism. Basically, this album demonstrates how much and how quickly Cheap Trick matured into the band they became.

The band explodes on the stage for all four shows. The energy level never wanes and this is the raw sound of a very hungry band. “He’s A Whore” has energy that is not heard on their debut album, while their cover of  “Ain’t That A Shame” (not yet recorded or released by the band) is simply astounding with a full drum and guitar battling for two minutes  until Zander comes in with his vocals. This is a band who has found their sound but are still exploring and experimenting.

The set list weighed heavily on their debut album, but they do a few songs from their second album (“Cry Cry” has much more energy here) which would be released in September 1977. That is right, they released two studio albums in 1977 and these shows are pretty much in the middle. Recorded in June, the band had already experienced a degree of commercial failure from their February album but persistent touring would propel In Color into the top 100. Here, at The Whisky, they are playing to a couple of hundred fans. There is no screaming girls yet, and their introductions of the songs are funny and conversational with the audience.

The CDs are complete shows. This includes the introduction, each night, by the now famous ‘Mayor of Sunset Strip’, KROQ DJ Rodney Bingenheimer , who at the time was just another disc jockey. But, given this is recorded in L.A., he needs to be there. While Cheap Trick is having fun on stage, the band is also serious about what it is doing. This is a tight band who have full understanding of each other and where they are going with each song.

Four CDs may seem a lot to non-fans, but in truth all four shows show the professionalism of the band and its ability to bring its show to the stage each night. This is not the sound of a band going through the motions (they still do not sound like they are going through the motions in their shows). Of course most of the songs are repeated each night but there are differences and surprises. “Loser” makes an appearance during their second show. This is a song they never fully recorded on their albums. And they change some songs from night to night. But again, this shows that every night they gave each song their all, or at least that is how it sounds.

The Whisky and Cheap Trick are still here. The Whisky still has shows (and an excellent menu) and Cheap Trick continues to tour and make fantastic albums. But 1977 is long gone and  Live At The Whisky 1977 is a wonderful document of the time and of a very young band just waiting to take the world by storm via another live album that will be released in two years. Fans of Cheap Trick will love this set but others will find the overall set and music of interest as well. This is an American band attempting British punk and succeeding. But the bottom line, this is just a brilliant and rocking set.

Born and raised in Whitby, Aaron discovered music through his love of The Beatles. This led to a career in radio, writing for various publications, and ultimately a radio show about The Beatles (Beatles Universe), which ran for over four years. When not immersed in music, Aaron enjoys spending time with the loves of his life -- his wife Andrea, and daughters Emily and Linda (all of whom have an intense love of music too).
RELATED ARTICLES
album reviewalbum reviewscheap trick
8.0