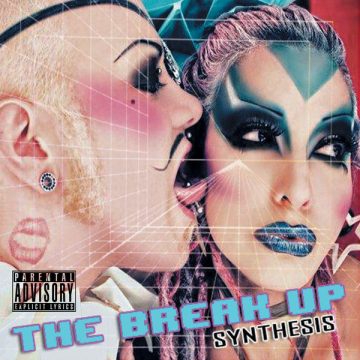 The Break Up
Synthesis
Metropolis Records

At some point of my life I used to think that Electronic music was dead. Back in time, at the dawn of the Electronic sound, the music had a purpose – to give freedom of expression to artists. But today, it has become so mainstream that it seems as if it only carries an empty beat for your feet to follow. I recently realized in what false belief I was living in.

The Break Up are a Seattle based Electro-pop band that will leave you enamoured from the first play of their dark electrifying tunes. They describe their songs as ‘retro electro’, which is exactly how they sound, but mastered and enriched. It is said that when a person dies his body gets lighter by 21 grams; this part that leaves is sometimes called the soul. Some believe it is a quantity of energy which can take different shapes and can never get lost in nature. Shane Allen Hall and Severina Sol seem to have found a way to reach that energy and double it in their album Synthesis.

The only way to understand what makes The Break Up such an interesting band is hidden in the music; you need to listen to fully get it. When hearing “Heartstrings” I imagine myself in a pine-tree forest, in the middle of a chase – that chase when you’re in love and don’t know whether you’re going to be loved back. The forest represents a dark place where you’re left only with your insecurities. Although the album is centered on the break-up experience, it doesn’t make you feel down, and it doesn’t leave you in desperation or depression. Exactly the opposite, songs like “Trapeze” fill you up with optimism and desire to rock the night out in stead of giving in to heartache, agony and pain.
All you need to do is press play.