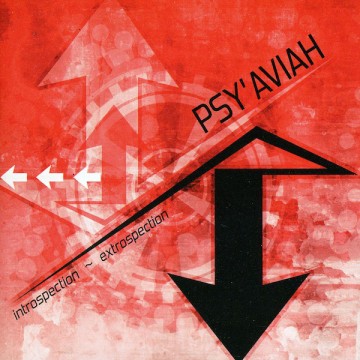 Do not let the name fool you – this album has nothing to do with exploring emotional depths and feelings… at least not when it comes to music.

Belgian Electronic band Psy’Aviah has released a new album, Introspection/Extrospection, meant to continue their experimental philosophy of sound that mixes different genres and styles. The band’s journey began in Antwerp, Belgium in 2003, and here they are today, eight years later.

It’s very difficult to write about music that makes you feel… well, nothing really. The lyric “No emotions” is sung in the track “Human Garbage,” and if this is what the band aimed at in this song, I should say they achieved their goal.

“OK,” on the other hand, is a song that clearly stands out. With a very gentle piano accompaniment that perfectly completes the voice of Emélie, “OK” is the light in the tunnel that makes listening through Introspection/Extrospection worthwhile. Most of the songs on the album have dark lyrics carrying loneliness and a pained heart, but the music doesn’t manage to support the message. A pleasant change to the record is “Deep Dark Desire,” featuring model and artist, Kari Berg. “On My Own” is also of interest to Electronic Dance fans.

Unfortunately, if you’re not that into Electronica, you won’t find anything here to grab and hold your attention. Introspection/Extrospection is stuck in the past. I’m strongly reminded of my childhood when I loved to ride the Ferris wheel while early ‘90s Electronica poured out from speakers down onto the fair; a happy memory you would say, but to me, the ‘90s were not the golden age of music.