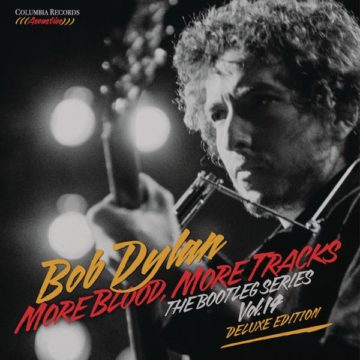 When Blood On The Tracks was released in 1975, it was quickly acclaimed as one Dylan’s best albums, and it has only grown in stature of over time. Quite simply, it is one of rock’s most personal, painful and best albums ever released. At the time Dylan had this to say about the album, “A lot of people tell me they enjoyed that album. It’s hard for me to relate to that – I mean, people enjoying that type of pain.” Perhaps ‘enjoy’ is the wrong word, but one thing is for sure, Blood On The Tracks is a classic album.  The other interesting fact about Blood On The Tracks, is that it was Dylan’s first album for Columbia records after he had left for Asylum Records for two releases. Columbia must have been very happy he returned with this one.

Here we are 44 years later and Dylan, in continuing with his brilliant ‘Bootleg’ series, (Number 14 for those keeping count) and he has finally released just about everything committed to tape in the studio for the album Blood on The Tracks, and the world is a much better place for it. I think Dylan fans have been waiting for this album for a long time. A lot of the material has been written about, almost in mythological proportions, and maybe some were doubting it existed. It does exist, and here it is for all to enjoy.

Blood On The Tracks was originally recorded over four days in New York City by Dylan, with a small band and at times, just him and a guitar. Copies were pressed, promos being readied to be sent out and then Dylan pulled the plug. His brother David convinced him that the album he had recorded was not ready for release. He felt the album needed more, different arrangements. Dylan agreed and  rerecorded the album, and it was released in 1975. Some of the songs from the original version have been made available prior to this set, on other ‘Bootleg’ volumes, but here it is in its entirety. The honesty and rawness is almost too much at times. Whereas Blood On The Tracks has a level of anger flowing through it (listen to “Idiot Wind”), the original versions of songs from the album sound sad, defeated, and depressed. Listen to “You’re A Big Girl, Now”, from those sessions. It is hopeless and Dylan sounds resigned to his failed relationship with Sarah.

Blood On The Tracks is famous for documenting Dylan’s marriage as it collapsed, thus, the pain Dylan mentions. Dylan has often said it is not autobiographical and at times he has said it is, you can take your pick. But, More Blood, More Tracks shows how these songs were developed, groomed and assembled. Also included is a different take of “Up To Me”, a song previously released on Biograph, but here is a different take and a different feel from that version. But the real gems come in the form of the demos or early versions and discovering the change of lyrics. For example, “Idiot Wind” features the lyric “I haven’t known peace and quiet for so long, I can’t remember what it’s like”, here on “Take 6” of “Idiot Wind”, Dylan sings  “I haven’t tasted peace and quiet for so long it seems like living Hell”. Not that it is better but it sure does change the sentiment of the song. This is only one example. The original lyrics are even more personal than the ones eventually released.

In his own way, Dylan has always been a perfectionist. He hears a sound in his head and wants that sound on tape or vinyl. This box set goes to great lengths to prove this point.  Multiple takes are an indication that he wanted the songs to sound just right and in that sense this is a fascinating sneak behind the curtain of a creative genius.

There are two different versions of this release, a standard set and a deluxe six-CD set. I prefer the six-CD set due to the extra material but both versions are excellent. Dylan has done a great job cleaning up the tapes and the songs sound crisp, fresh and new. His voice is perfect and it is extremely well mixed. As with all of Dylan’s ‘Bootleg’ series, it is well documented in a book that accompanies the release.

Blood On The Tracks is one of the most important albums ever released. Here Dylan finally lets the rest of the world in on some pretty astounding versions of those incredible songs. To be clear, the actual album Blood On The Tracks is not included. More Blood, More Tracks is its own album and a welcome addition to the ever-expanding Dylan catalogue.

Born and raised in Whitby, Aaron discovered music through his love of The Beatles. This led to a career in radio, writing for various publications, and ultimately a radio show about The Beatles (Beatles Universe), which ran for over four years. When not immersed in music, Aaron enjoys spending time with the loves of his life -- his wife Andrea, and daughters Emily and Linda (all of whom have an intense love of music too).
RELATED ARTICLES
album reviewalbum reviewsblood on the tracks
7.0