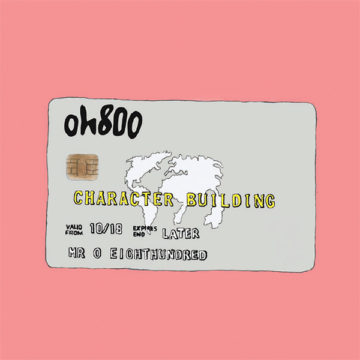 “I’ve had it up to here with character building,” sings Eoin Rooney with backing from oh800 in their song “Character Building”, the opening song from their debut album of the same name. oh800 are Eoin Rooney, Gavin Ellis, Olly Betts, all based in London. They have their own distinct sound, electro funk/punk. These guys have been listening to Talking Heads, P.I.L., LCD Soundsystem but that does mean they rip them off. oh800 have developed their own sound, much like their unique name.

The album is very energetic, very danceable and very listenable. They are not pure punk, actually more funk than punk, but it has that punk edge that adds that little extra ingredient to the music. But what makes this album stand out is the variety of sounds on one album. It runs the gamut so the listener never becomes bored with the music.

The other aspect is that as depressing and cynical some of the songs are, there is a legitimate sense of humour throughout. You find yourself smiling at some of their observations and ability to turn a phrase. “Baby’s got a playfulness with words and a gentle soul,” Rooney sings in “Mission To Mars”. “She’ll take a laugh out of a shit situation/Send me on a mission to Mars.” Not something you hear in many songs.

The album ends in style with the incredible “Weird Dial”, an exercise in freak out psychedelic mixed with 1980s pop, and damn, it works. The guitar work, combined with the synth and electrobeat just makes your head spin or swim.

Character Building is an excellent debut. The band is not shy of tipping their hat to their influences, while at the same time creating their own distinct sound. The lyrics are fun, depressing and all points in between. It is well-produced, with just enough raw arrangements that adds to energy of the record.