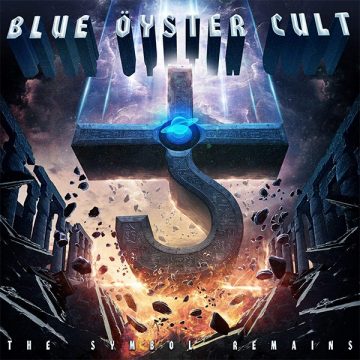 Blue Öyster Cult is back–and in a big way! The Symbol Remains is their first studio album since 2001’s Curse Of The Hidden Mirror. Since then, the band have toured consistently, and have been mining the vault for live recordings for the fans. This year alone, they have released three live albums, but The Symbol Remains is what the fans have been asking and waiting for these past two decades. There is something comforting in older bands, such as Blue Öyster Cult, returning with a new album.

Guitar solos are traded between members, while Miranda and Radino provide a solid rhythm backing. The power is here, and so are the strong melodies, which they have always had an ear for. Since their debut, they have incorporated other styles into their version of heavy metal, and it has always worked for them. For example, a song such as “Box In My Head”  has an incredible melody and infectious hook, that burrows into your brain after only one spin on the turntable. The closing track, “The Fight” is similar,  in its hook-ladened melody. There are also some tips of the hat to the past (the opening “Florida Man” does remind me of “(Don’t Fear)The Reaper”).

The album opens with the powerful “That Was Me”, a forceful, loud, rocking song, with heavy drums and searing guitar solos, which sets the stage for the album. Once it starts, you know what you are in for, heavy metal. Pure and simple. That is the only problem with the album–there is a sameness to it throughout. When they break out of the mold, such as on the stunning “Edge Of The World”, they demonstrate that they still have a great deal of creativity. Even the opening sound effect of “The Machine” is quite clever, and a welcome relief from the other standard openings of songs. More of that cleverness would be very welcome.

Overall, the vocals are strong, the musicianship is superb, and the album is well-produced. Fans will not be disappointed, and while they may not attract new followers, the album will appeal to those of the genre. The Symbol Remains is solid and clearly shows that there is a great deal of life left in this band.

Born and raised in Whitby, Aaron discovered music through his love of The Beatles. This led to a career in radio, writing for various publications, and ultimately a radio show about The Beatles (Beatles Universe), which ran for over four years. When not immersed in music, Aaron enjoys spending time with the loves of his life -- his wife Andrea, and daughters Emily and Linda (all of whom have an intense love of music too).
RELATED ARTICLES
album reviewalbum reviewsblue öyster cult
7.0