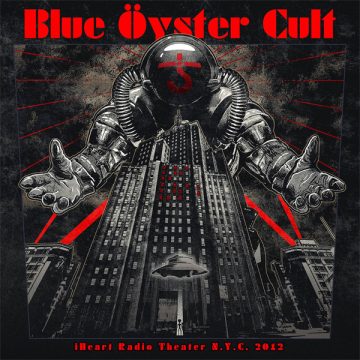 Frontiers Music, along with Blue Öyster Cult, continue their release of archival material of this classic rock band. Some of the music has been released before, and some, as with this album, has not. This show at iHeart Radio Theatre was originally filmed and recorded for a webcast so the quality is extremely good, without all the studio fixes and overdubs. A true live album. Basically, you get what was performed that night and that is more than good enough for me. As fans know, there have been  a number of line-up changes in this band over the years. This may not be the ‘golden line-\up” but they are damn good and they certainly know how to produce that Blue Öyster Cult sound.

iHeart Radio Theatre N.Y.C. 2012 is full of Blue Öyster Cult’s hits and better radio cuts. You get live versions of “Godzilla”, “Golden Age Of Leather”, “Burnin’ For You”, and of course “(Don’t Fear) The Reaper”. But there are some deeper album cuts that are welcome additions to their growing catalogue of live albums. “This Ain’t The Summer of Love”, “Career Of Evil” and “The Vigil” are all great to hear again and come off extremely well.

Overall, a great live album. Fans of Blue Öyster Cult should welcome this with open arms. The band seems to be enjoying themselves, and there is an energy on this record, not often found on live recordings. Once again, Frontiers Music and Blue Öyster Cult have come up with an excellent live album.

Born and raised in Whitby, Aaron discovered music through his love of The Beatles. This led to a career in radio, writing for various publications, and ultimately a radio show about The Beatles (Beatles Universe), which ran for over four years. When not immersed in music, Aaron enjoys spending time with the loves of his life -- his wife Andrea, and daughters Emily and Linda (all of whom have an intense love of music too).
RELATED ARTICLES
album reviewalbum reviewsblue öyster cult
7.0