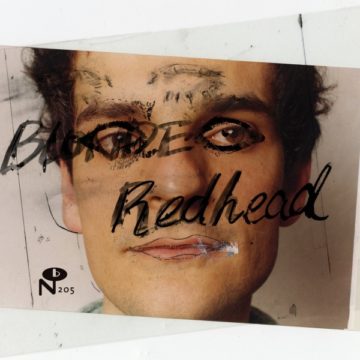 You may not realize it, but Blonde Redhead’s been making music since 1993. Check that. Let’s do that first sentence over again. You may not know it or you may have forgotten but Blonde Redhead’s still a band. They make music – Grungy, Noisy, Shoegazy, dreamy music filtered through the viewpoint of cultural outsiders — two Italian brothers, Amedeo and Simone Pace, and the Japanese Kazu Makino. Other members have come and gone, but the original trio remains.

It’s not exactly fair to say that Blonde Redhead resists or avoids the catchy hook that begets a memorable single. During its later albums, the band has grown fonder of an accessible melody (with mixed results). It emerged from Sonic Youth’s New York City. Sonic Youth — the band that gave Nirvana life and a pre-existing platform — that had without significant fanfare kicked off a revolution in popular music. Blonde Redhead emerged from this Grunge scene with a sense of humour and an acknowledgment of the duplicity of popular music characterized by an emotional rejection of the institution.

The retrospective Masculin Féminin revisits Blonde Redhead’s first two records – 1995’s self-titled debut and La Mia Vita Violenta – but also includes outtakes and associated radio sessions. The experience provides a nostalgic trip for fans, but an excellent introduction for the uninitiated who may only know Blonde Redhead secondhand, through the many numbers of bands they now inspire. Though it’s easy to attribute the sound of many of these ’90’s regurgitations to Sonic Youth, listen more closely. They may rip a Sonic Youth riff or a drum cadence, but the playful, Poppier tendencies of these retreads stem from Blonde Redhead’s Freudian subtext and self-awareness. Never were they as “hard” or as abrasive as the prevailing winds of the Grunge movement, but they, like their contemporaries, believed in the power of sonic disillusionment.

On the self-titled debut, the disparate influences sometimes come into tension and foster discord rather than harmony. Blonde Redhead had not yet assembled the final pieces of the puzzle. Despite the rawness of the material, individual highlights emerge as the tease of what the band would become during its peak creative period between 1997 and 2000.

Let the rolling wave of guitar wash over you in “Snippet.” Heavy, repetitive and droning before a ray of sunlight breaks through the cloud cover and the anger dissipates, leaving only the melody. Humble and heartening. The opener “I Don’t Want U” feels like the ravings of love-torn bodies, scorned surely, but not yet ready to give up. If even hope fails, self-actualization emerges from even the darkest corners.

La Mia Vita Violenta, however, reveals the first of Blonde Redhead’s art Pop tendencies. Hooks and Jazz riffs gain greater footing against the fuzz and drone. The two singers – Kazu’s reedy, explosive vocals similarly find greater balance with Simone’s steady anchor. “(I Am Taking Out My Eurotrash) I Still Get Rocks Off” serves as a raucous opener, a brilliant cross-section of the entire record. A pastiche of sounds and images, stitched together, just as often artfully as artificially.

Compare “Eurotrash” to “23,” the opening track of the 2007 album of the same name. Though the two tracks at first appear miles apart, listen specifically to the bassline and the drums. The bones remain despite the disparate aims of the two tracks. The off-kilter, artsy Grunge of La Mia Vita Violenta remains — scrubbed semi-smooth with a course Dreampop sandpaper and ethereal vocals.

It’s easy to compartmentalize a band’s progress or evolution into pre- and post- categories of legitimacy, the tragedy of a Dickensian Tale of Two Bands. Fans greet shifts toward broader accessibility with defiance. The “I used to be a fan, but…” speech. Bands change. We all change. Nobody wants to be the only guy at a party wearing Zubaz pants. Blonde Redhead’s No-Wave, Post-Nothing beginning in the wake of Sonic Youth places them in royal company. But the transition away from that New York scene happened more rapidly than you might remember.

Those who met the band later in its career should welcome Masculin Féminin as an anthropological discovery. Those who had written off the band after its latest records could do with the refresher about why we still care about Blonde Redhead’s avant-Rock. This patchwork collection of raw Blonde Redhead does us all good. A return to a moment in Rock music when the release of anger and disillusionment felt new — best of all it felt real, even when the artist evolved and dared to question the genre’s end of days.

James David Patrick has a B.A. in film studies from Emory University, an M.F.A in Creative Writing from the University of Southern Maine, and an honorary Ph.D. in bullshitting about everything else from the College of Two Pints. His fiction and non-fiction has appeared in PANK, Monkeybicycle, Squalorly, Specter Lit, and Bartleby Snopes among other wordy magazines. While he does not like to brag (much), he has interviewed Tom Hanks and is pretty sure you haven't. He bl-gs about music, movies, and nostalgia at thirtyhertzrumble.com and runs the James Bond Social Media Project at thejamesbondsocialmediaproject.com. James lives in Pittsburgh, PA.
RELATED ARTICLES
4adalbum reviews
9.0