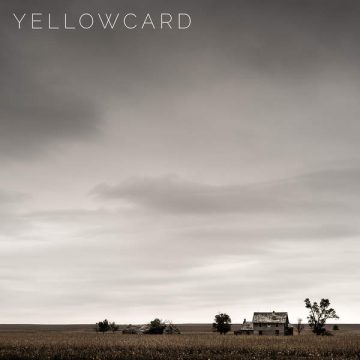 Walking off into the sunset…

If you’ve consumed enough music genres through whatever means you have, then Yellowcard is a name that some audiophiles immediately recognize, and after almost 20 years of entertaining fans (and a hiatus from 2008-2010) with their brand of American punk-rock, the Jacksonville, Florida group is calling it a career. Yellowcard’s rotating line-up (17 members have been showcased with this band since 1997) will finally end with their eponymous 10th album. With Ryan Key on lead vocals (and an array of instruments), Sean Mackin on vocals / classical string arrangements, Ryan Mendez on lead guitar and Josh Portman on bass guitar, it would be interesting to see how this album plays out and how Yellowcard will end their final act on the musical stage.

Ominously, they have set the tone with the lead track “Rest In Peace” to greet their fans with the impending finality of their last album and final world tour. A good intro gets the album on good footing as Key croons, “If this was the last time that we would ever speak”. Ironic. The pop punk group then speeds up the tempo in “What Appears”, with distorted Key vocals marinating the track with a repetitive guitar riff. Moving on to “Got Yours”, this sounds like a definitive Yellowcard song, but the guitar riff reminded me too much of a Foo Fighters imitation (“Everlong”). This bugged me as I also felt the same way about “The Hurt Is Gone” (interesting wall of sound) with the chord / bass progressions. One slightly nagging observation is that I felt some of the endings of certain songs can be quite drawn out too much with instrumentals. One example can be found in “The Hurt Is Gone” where the ending repeats ad nauseum, forcing home the point of the lyrics “the hurt is gone, yeah it’s gone….”. I’m not sure what the last 18 seconds was about with the instrumentals and how that fit into the greater idea of the song? On the flip side, Yellowcard did create some nice bridges with songs like “A Place We Set Afire”, as Key pleads “We don’t have to say goodbye”, thus continuing the album’s theme of finality. With the nice ballad “Leave A Light On”, it leads with an ambitious piano opening, paired with Key’s vocals as glorious instrumentals abound with the classical instruments arrangements. Staple classical instruments such as the “Yellowcard violin” are strewn throughout the release to appease most fans as Sean Mackin (violins), Rodney Wirtz (viola) and Christine Lightner (cello) do a great job on the tracks when asked, and one wished there was more of their influence. Very underrated. My enjoyment of the next track’s catchy acoustic guitar intro was then stopped suddenly as I did a “hey now!!” while reading the track name “I’m A Wrecking Ball”. Supposedly this song was written by Key in 2008, which clearly preceded Miley “Express Yourself” Cyrus’ similar titled song in 2013 (if my Math and knowledge of blue police box time travel is correct). Coincidence? I wasn’t able to fully immerse myself into that tangent as the next song “Saviour’s Robes” slammed me in the mouth with the guitar power chords right off the bat. Great lyrical hook in this one, as Key bleats “Play us a song I know…Make it an older one”. I can empathize with this feeling, as most fans whose band has lasted for a couple of albums pine for the older, more popular tunes during live concerts / shows. In that vein, Yellowcard would always try to ensure that no album sounded the same, much to the chagrin of some fans  who are stuck in their OCD ways of needing to sound the same on every album. Riiiight. Loved the haunting bridge on this track, with its wall of sound and use of hazy guitars, slowing building up to Key’s vocals splattering over the pummeling drums. The release ends with “Fields and Fences”, a country-sounding track that fades into instrumentals at the end, evoking feelings of hopefulness. For me, the finality of the last song was kind of “meh”, as I was expecting a huge sonic wall of sound ending with more powerful violins / violas a la Smashing Pumpkins “Tonight, Tonight” to bring the band and their albums full circle!!! But sadly, I never got it, and I felt let down.

This band will forever be known for “Ocean Avenue”, which is a shame, because they are more than the sum of that song which defined their career. This self entitled album shows fans and music lovers alike that Yellowcard was able to write their own ticket and end things on their own terms, instead of drawing out their career beyond its shelf life and outstaying their welcome. It’s time to pass the musical mantle to the next group, and Yellowcard were more than willing to do their fair share of holding it high enough for all to see, while enjoying the ride. Critics will opine that this isn’t an indelible high of perfection, but Yellowcard’s effort on this album will not tarnish their band’s legacy of rocking hard for their fans with enjoyable music.

Insert pretentious stuff about me here. I was born at a very young age. I am pretty, funny... without the comma. Easily distracte
RELATED ARTICLES
album reviewshopeless records
8.0