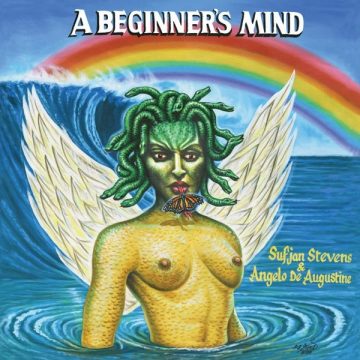 Sufjan Stevens has never been one to shy away from gimmicky concept albums. After all, his discography includes two 50+ song albums dedicated to Christmas, a collaborative project with The National’s Bryan Dessner inspired by the Solar System, and his infamous ’Fifty States’ project, an ambitious, never-to-be-completed goal to release an album inspired by every US state.

A Beginner’s Mind, the debut full-length collaboration between Stevens and Angelo De Augustine, was inspired by movies. A different film inspires each song, from well-known classics like The Wizard of Oz, to genre staples like Night of the Living Dead, and even B-movie trash like Hellraiser III: Hell On Earth. While some songs explicitly reference a movie (guess what movie “Back to Oz” is referencing?), most songs are only loosely inspired by the films.

The album’s artwork comes courtesy of Ghanaian artist Daniel Anum Jasper. In Ghana during the late ’80s, a novel “mobile cinema” culture emerged when enterprising film fans screened Hollywood blockbusters in the backs of pick-up trucks using portable generators. To advertise the movies, artists painted alternate posters inspired only by the scant information they had about each film. Sufjan and De Augustine commissioned Jasper to paint a series of new works for “A Beginner’s Mind”. Information about the project was kept deliberately vague, resulting in a strikingly bizarre piece of album artwork.

While the artwork is bizarre, the music is familiar. De Augustine feels like the perfect pair for Stevens – in fact, their voices are at times indistinguishable. Partly due to their musical similarity, it is easy for Sufjan’s influence to dominate the album.

Sufjan thrives in softness and this is a welcome return to quiet instrumentation. The title track perfectly captures the mood of the record. Soft high vocals, echoing piano, oscillating melodies, and airy harmonies make up much of the album’s musical palette.

At times, this sense of familiarity can be mistaken for dullness. “The Pillar of Souls” sounds like a parody of a Sufjan Stevens song. Similarly, on “You Give Death A Bad Name,” the melody gets lost in the sweeping atmospheric music for most of the song’s runtime.

As a whole, this feels like a standard Sufjan Stevens album. This is not a bad thing – Stevens is one of the most prolific composers of our time and the album is filled with excellent production and lovely instrumentation. However, because he has shown his ability to oscillate between intimacy and excess on previous albums, this one feels a bit restrained by comparison.