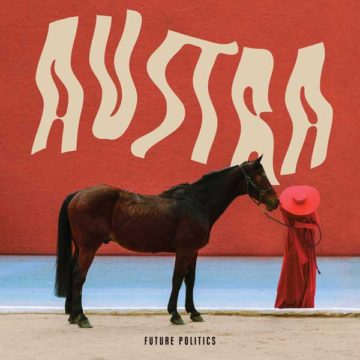 Kate Stelmanis and her main counterpart, Maya Postepski, are Austra: the electronic music producers from Ontario, Canada. The release of their third studio album, Future Politics, is the most ambitious to date. Not falling far from the ideals of The Radio Dept.’s recent release of Running Out Of Love, this album is a call out of the world’s current dystopian state. The writing of this album was heavily influenced by Kate’s time living in two vastly different cities, Montreal and Mexico City. Kate was driven and inspired by the clash of social, economic, and philosophical ideals.

Future Politics maintains a steady drive of propulsive house beats. It blends soothing and delicate melodies of synth-pop with club worthy danceability. The record has a concept and purpose, depicted through Stelmanis’ lyricism and the band’s up-tempo tendencies. The songs render something you might find on a Chairlift album — maybe it’s talent that Stemanis and Caroline Polachek learned in operatic training.

“Future Politics”, the album’s title track, kicks right in with a club rock groove that sounds like the band has been listening to The Faint. The distorted bass and clingy, sharp electronic drums provide an urgent but calm house track. In the middle of the album, Austra breaks down to a more funky hip-hop sound on “Angel In Your Eye”. Arpeggiated synths wash in and out while Kate croons, “I need it”, with slow and seductive repetition. On “Beyond a Mortal”, Kate wallows in a dreamy, slow building vocal performance. Bouncing percussive hits and washy cymbals push the tune along behind a heavy, drowning synth bass.

The album is clearly political, but it’s also personal and inspirational. The beats are feverish and the vocal melodies have an unsettling manner in them. Stemanis’ unique sleepless tone lets you hear the passion for the topics this album discusses. Austra’s greatest strength might be       presenting shocking and important issues in a mellow, almost soothing, manner. The band is clever and talented, yet there’s not much more to this album that fans haven’t already heard previously from Feel It Break and Olympia. Despite the newfound appreciation and influence Kate felt from Montreal and Mexico City, there aren’t many new elements to Austra’s sound. No touch of traditional folk sounds or hint of the thriving Latin American club scene. The group will hit the road on January 20, starting in Toronto and ending in Detroit on February 19.

After majoring in business & entrepreneurship at UCSB and traveling the world, Andrew moved to Los Angeles to pursue music and not give up his love for surfing, hiking and yoga. He is also in a couple really cool, up and coming, indie-rock bands in LA - Mothlight & Lone Kodiak.
RELATED ARTICLES
album reviewsaustradomino records
10