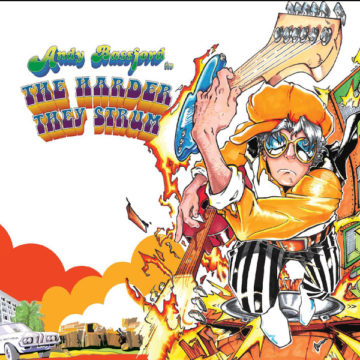 The movie soundtrack has been an important part of the music business since the advent of the long playing disc, or LP, in the late 1940s. The LP was an excellent format for musical theatre, concert performances, and longer pieces from the classical repertoire. It also served as invaluable promotional material for Broadway musicals; My Fair Lady, South Pacific,West Side Story and The Sound of Music all sold in the millions and remained on the charts for years.

After the golden age of movie music (my opinion!) with composers such as Nino Rota, Max Steiner and Bernard Herreman creating original scores for movies, producers began to dip into the popular music charts. In the thirties and forties, popular films would make the songs featured in them into radio hits, but by the sixties the power of the record industry meant that many producers, with films like Easy Rider and Mean Streets, began to use current pop music to comment, sometimes ironically, on the visual action.

But there is another kind of movie soundtrack, one that opens up a whole new musical universe to the viewer, and before the movie business became truly international these soundtracks introduced North American audiences to musical worlds outside the mainstream. Black Orpheus in 1958 introduced the exciting music of Brazil, with its African and European roots and O Brother Where Art Thou presented the music of the depression era South in a startlingly new context, for an audience out of touch with its own past.

For North American audiences, the soundtrack to Perry Henzells’ 1972 Jamaican music business thriller The Harder They Come was an intoxicating introduction to the amazing vitality and inventiveness of Jamaican music. The experimental nature of much of the rock music of the late sixties meant that there was now an audience of music listeners ready to embrace new sounds and influences, ready to respond to the pure musical energy of regga, primed for the 1973 introduction of Bob Marley into the US market. And one of these avid listeners was a young guitarist from Connecticut named Andy Bassford. Already an accomplished musician at a young age, Andy was captivated by this different musical language and instantly recognized it as a unique and vital musical form.

Only a few years later Andy moves to Jamaica and becomes one of the most in demand guitar players in the extremely competitive Kingston recording business, and as reggae grows in world wide popularity Andy becomes an integral part of live shows by all the major Jamaican singers.

And now after literally playing on thousands of sessions and live shows, Andy has recorded his first solo album…and it is a stunner. Titled The Harder They Strum, the album is a track by track instrumental recreation of the original soundtrack to Perry Henzell’s groundbreaking film.

“Seeing the movie and buying the soundtrack set me on a journey that continues to this day. So it seemed natural to me to revisit it now after over forty years of recording and performing with the best musicians and singers from Jamaica”

The album follows the same track order as the original soundtrack so we begin with the iconic Jimmy Cliff hit “You Can Get It If You Really Want”.  Andy states the melody crisply and cleanly, with a light, singing tone that recalls the Jimmy Cliff vocal, then we get a beautiful jam over the horns, with some wicked call and answer to set the tone for the whole album.

“Stop That Train” is an outstanding groove, a taste of the vocal, then some beautiful piano and guitar exchanges featuring one of Jamaica’s finest, jazz legend Monty Alexander. This track highlights the richness of the harmonic variations that can be wrestled out of a few chords, a reflection of the islands’ rich jazz legacy.

“Of the ten songs, six were recorded completely live in the studio. Nobody punched in or fixed anything, although we did a bit of cleanup during the mixes. What you hear is pretty much what everybody played at that moment in time. We didn’t use click tracks either —  I didn’t even know that click tracks existed until I left Jamaica and we did just fine without them back then. So I figured we’d do just fine without them now.”

Reggae has always been a music of striking opposites. Known for the boldly stated bass and drum foundation, the glory of Jamaican producers and engineers, the music gains much of its beauty and propulsion from the details… the percussion interplay, a sudden keyboard accent, an outrageously “blue” note by a singer or instrumentalist or a random “mix” section.

This is shown in fine detail on “Rivers of Babylon”, a song that has reached millions of people through a number of different versions and is richly reimagined here. Beginning with a nod to reggae’s New Orleans lineage and religious roots, the horns play a funeral march version of the melody, then Andy starts in. So almost everyone sings or plays on the album, the familiar melody on 12-string guitar, and the song is then reprised by the horns with the kind of jubilant, Dixieland swing that was played on the way back from the grave at New Orleans funerals.

References like these are all through this album. Andy’s guitar tones allude to not only a world of guitar tonality but also contain the vocal characteristics of many of the original singers. Some of the songs have some vocals to lend context and this is delightfully done on the Maytals classic “Sweet and Dandy”, with its hilarious description of a wedding gone wrong.

“I also wanted to document the musical relationships and friendships I’ve developed over my career. So almost everyone who sings or plays on the record, as well as the people who recorded, mixed and mastered it, is a friend and/or colleague of long standing.”

One of the most striking things about Jamaican music and reggae especially, is that it is primarily an ensemble music, its greatest glories are achieved by the group effort — remove one element and the structure falls down. That doesn’t mean there aren’t stars, or performers who distinguish themselves, just that the music demands a oneness of purpose.

This album is one beautiful example of the results of this approach, the music feels organic and natural, a vital connection to its musical roots, combined with a recording that is sonically up to date in every way. Jamaican music has always been able to capture the vitality of the past while leading the way into the future, this is just a beautiful stop along the way.