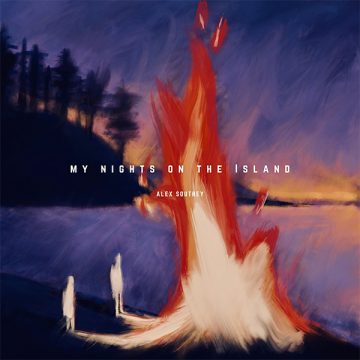 Alex Southey
My Nights On The Island
Independent

There are two things you need to know about Alex Southey. First, the man is remarkably prolific. My Nights On The Island follows his last album, …And The Country Stirred which was released in February of this year. The second thing is one can never predict what the album or, in this case EP, will sound like. My Nights On The Island, a concept of sorts about the ending of a relationship, is far from his roots as a folk artist. It is full of well-produced full arrangements and sounds. Southey layers sounds and voices to their fullest and greatest effect.

“The Gods Are Fighting” is a beautiful song using stunning string arrangements and layered vocals. “I wrote the song around the time my last significant relationship ended. That also happened to be when it felt as though Toronto and its relationship with many of its citizens was at an all-time low. The song describes the dual positions of a relationship that has soured – where even dreams are muted and the agreed upon etiquette is out the window.”

The use of music and sound effects are put to great effects throughout the EP.  “Mellotron and Juliet” is a great example. The instrumental is bookended by seemingly found sounds of conversations and the use of vocals without lyrics throughout creates an emotional response to what one is hearing. The song is more or less an introduction to the title track, a beautiful song and one that demonstrates Southey’s ability to incorporate and layer sounds. But he is smart enough never to overdo either effect. The end result is a near perfect soundtrack to the story he is telling.

But Southey never just tells a story, rather his lyrics read like poetry and there is a certain degree of interpretation, but this, agains, adds to the beauty of the E.P. But the sentiment is there and is augmented by the brilliant arrangements of the song. Not to mention Southey’s own strong vocal performance.

My Nights On The Island is a great E.P. Southey continues to grow and expand as an artist and continues to set his own bar. Each release is better than the last one, which says a lot. His exploration into sound and his use of arrangements demonstrates his inability to stand still and be pigeonholed into any one style or genre. Also, the fact that he not only plays all the instruments, he has also produced and arranged the songs shows one hell of a talented artist.

Born and raised in Whitby, Aaron discovered music through his love of The Beatles. This led to a career in radio, writing for various publications, and ultimately a radio show about The Beatles (Beatles Universe), which ran for over four years. When not immersed in music, Aaron enjoys spending time with the loves of his life -- his wife Andrea, and daughters Emily and Linda (all of whom have an intense love of music too).
RELATED ARTICLES
album reviewalbum reviewsalex southey
8.0