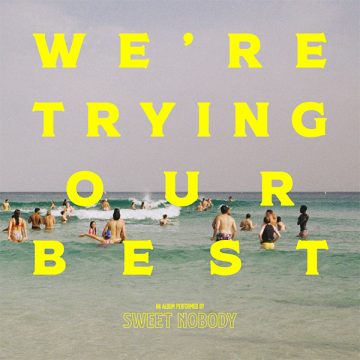 After initially being scheduled for release in summer 2020, the indie rock/pop band Sweet Nobody has at long last released their sophomore full-length album We’re Trying Our Best. Written by lead singer Joy Deyo as a way to process her own challenges living with chronic pain, the album comes out at a time when the themes inherent in it apply to more of us than ever.

Opening tracks “Not a Good Judge” and “Why Don’t You Break My Heart” work as sunny, poppy songs despite the eyes-down lyrical content. In the first, Deyo sings, beautifully, that “I’m not a good judge I’m not a good jury/but with my heart and my fears aside, I think I’ll have a chance,” laying out a theme of the album that any confused modern person should be able to relate to. The second track, “Why Don’t You Break My Heart” is a standout track with a groovy bass line and tinkling waves of sound like quotation marks around the chorus, and reveals a band whose song craft is subtle, yet thoughtful.

“Rhoda” follows and changes the vibe, opening with a grungier, more feedback laden sound that is a bit jarring after the two opening tracks and verges more into faster-paced punk pop. Two tracks later, early single “Young Love” slows the pace again into lilting pop ballad territory and has nice cresting drum builds leading up to the chorus that are reminiscent of a lost Cardigans track.

The guitar here deserves a mention as well, with much of it emanating a subtle 10 percent western twang that contributes well to Deyo’s excellent lyrics and voice and can sometimes take the lead in a song like “Million Yard Stare,” which is yet another standout track.

Sweet Nobody feels like a band who can do anything they want inside the realm of indie pop-rock. A track towards the end, “Little Ghost”, is an example of something a little fuzzier, featuring big gusts of droning guitar underneath that only shows up on that track and sheds the more crystalline song craft of some of the earlier songs in a good way, in a way that shows breadth.

Anchored around Joy Deyo’s voice and lyrics, and some very groovy guitar, Sweet Nobody has released an excellent album here that should rightfully stand next to bands like Alvvays or The Cardigans. In this case, it turns out that trying their best is plenty good enough.