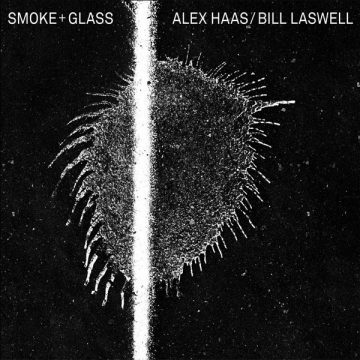 Bill Laswell is a well-established name in the music world as the producer/bassist has worked with almost everybody in any music genre you can imagine. On the other hand, Alex Haas, a composer and a multimedia artist in his own right, possibly does not have the same ‘big name’ stature as Laswell.

On Smoke + Glass, their collaboration, it makes no difference, as the duo, along with all the others involved, seems to fit together like a glove. After all, not only is this their second joint album,  but they worked as producers with a list of big names from the initial Bootsy Collins production to David Bowie, PIL, The Ramones, Prince, Brian Eno and Motorhead, and assisted on Grammy-winning sessions for U2’s “All That You Can Leave Behind” and Eric Clapton’s “Tears in Heaven.

Is it all here on Smoke + Glass? Yes, including the Lemmy-style bass sound Laswell can produce in a second! But, the moment the first few chords of the opener “Truth Be Told” kick in, you realize the accent is on all that went on from King Tubby to Miles Davis seen through the eyes of Massive Attack at their best and their most inventive. Throughout, it is obvious that Haas and Laswell do not shy away from the now dreaded term of trip-hop, but embrace it in full, showing why that genre can have a merit today.